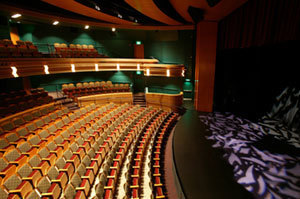 The 2013-14 season of the University of Notre Dame’s Department of Film, Television and Theatre will feature four plays, beginning in October with “On the Verge.”

The opening play, written by Eric Overmyer, a writer for the television programs “Law & Order” and “Treme,” focuses on three Victorian women who trek through Terra Incognita, encountering such wonders as Mr. Coffee, Cool Whip and a yeti. The comedy, directed, designed and performed by an all-student company, will take place Oct. 3-13 in the Philbin Studio Theatre.

The three remaining plays are:

A special spring presale will take place from April 17 to May 23. During this time, season subscriptions will be sold at 2012-13 prices: $28 for the general public, $23 for seniors and Notre Dame faculty and staff, and $17 for students. Subscription packages include one ticket to all four shows and represent a savings of 50 to 65 percent compared to the single ticket price. Regular subscriptions and single tickets will go on sale at 2013-14 rates in August.

Tickets are available online at performingarts.nd.edu, or by calling 574-631-2800, or visiting the DeBartolo Performing Arts Center ticket office.