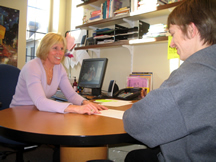 Go on, admit it. You have a couple of preconceived notions about home-schoolers. Über-brainy and family-oriented, they always win the spelling bee and, OK, maybe they’re just a teeny bit shy and awkward on the social scene.

Well, forget what you think you know. Today’s home-schoolers represent a contingent of bright, popular potential college students. And a steady number are choosing Notre Dame as, for some of them, their first experience in a traditional school setting.

Ive found everyone has been pretty accepting and a lot of kids will think it’s cool or ask questions about it because they’re curious,says sophomore Christina Emilian, a Fort Wayne, Ind., native.

She is one of about a dozen home-schooled students who enroll at Notre Dame each year. The University receives some 50 applications from home-schoolers annually, with an acceptance rate of about 30 percent, roughly the same as their traditionally schooled counterparts.

They’re making the transition remarkably well, according to Angie Chamblee, associate dean of Notre Dame’s First Year of Studies (FYS) Program, who likens the home schooling trend to a return to pioneer days.

Its not a new phenomenon, it’s just recurring,she says.Education is cyclical. Rather than looking at these students as anomalies, it’s just one of many options we have now. And with the Internet and other technologies at our fingertips, were going to see more of these things.

Outgoing and stylish, Emilian breaks pretty much every stereotype on the books about home-schoolers, and has heard as much on numerous occasions.

There have been some people who would say, You were home-schooled? I never would think you would have been home-schooled,recalls the theology major.

You wear normal clothes, you wear pants, you wear makeup, you like boys. You’re normal!

Normalis a word that comes up a lot in discussions about home-schoolers at Notre Dame.

You couldn’t pick the home-schooled kids out of a line-up of students,says Ken DeBoer, assistant dean of FYS.

DeBoer half-jokingly points out that home-schoolers are allvaledictorians of their graduating classand tend to be very self-sufficient. His colleague, FYS academic advisor Laura Flynn, agrees on that point and adds that if a student does happen to need a little help making friends or finding things to do, it’s a fairly easy fix.If they’re not social, we try to set them up with activities, but we do that for everyone,she said.

Notre Dame does treat home-schoolers differently in one areathe admissions process. They are required to takethree extraSATsubject exams, but the University will make “common sense adjustments” and wouldn’t require say, a student who received numerous awards in Latin to take the Latin test, for example. Some parents and students have complained the additional requirements are unfair, but all seem willing to comply.

In the relatively short history of home-schoolers at Notre Dame, there have been instances of students who excel and those who struggle.We know from the outset that they’re coming in a little different and it may require something special, or it may not,says DeBoer.

And many of these students bring something special to the table themselves. DeBoer recalls one home-schooled student who studied Russian on her own and went on to become the first and, thus far, only student in Notre Dame history to test into second-year Russian.

And then there’s Notre Dame’s most famous home-schooler to date, freshman Emerson Spartz, the mastermind behindMuggleNet, one of the most successful Harry Potter sites on the Web. Spartz describes himself as “self-taught,” meaning he completed his curriculum more or less on his own (yes, calculus, too) while at home. He believes this independent approach may actually have given him an edge among his peers.

“I think the transition to college may have even been easier for me than others because I was already used to the extra responsibilities,” Spartz said.

Working independently also came naturally to Bodie Solomon, a freshman from Sierra Madre,Calif., who was home-schooled through high school. “From about age 12 onward I was teaching myself out of textbooks,” he recalls.

Solomon, however, says adjusting to college life was a bit of a challenge.The biggest difference coming here was I was around people 24/7,he recalls.I think a large part of it was I wasn’t sure who I was as much as maybe some other kids from high school, especially since Im an only child. But at the same time, looking back, I dont think my experience has been that much different from a lot of my peers here.

Changing his academic focus from engineering to business helped his academic adjustment, as did settling into a social circle where he feels comfortable.

And doesnt that sound like a typical freshman-year story?