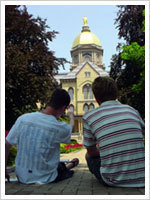 The University of Notre Dames 2,000-member freshman class, selected from a pool of 13,948 applicants, is the most academically accomplished in University history.

The students arrived on campus with an average SAT score of 140516 points higher than last years freshmen who represented an all-time highand 72 percent were ranked in the top five of their graduating classes.

Other notable statistics on the freshman class:

 The male-female ratio is 52-48 percent, respectively.

 24 percent are the children of alumni.

 90 percent were involved as high-schoolers in community service.

 10 percent were president of their student government.

 11 percent were editor of their school publication.

 47 percent participated in the performing arts.