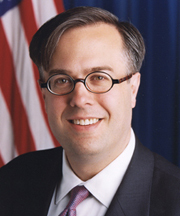 Washington Post columnist and former White House speechwriter Michael Gerson will deliver the inaugural McCullough Lecture in Responsible Journalism and Government on Oct. 29 (Wednesday) at the University of Notre Dame.

Gerson, a senior fellow at the Council on Foreign Relations, will speak on2008 and Beyond: Looking at the New Political Landscapeat 7:30 p.m. in the auditorium of McKenna Hall. The lecture is free and open to the public.

The McCullough Lecture series seeks to promote greater understanding of journalistic and governmental work as a form of public service. Since 2007, Sandra and John McCullough Scholarships in Journalism or Government have supported Notre Dame students interested in careers in elected office, a government agency or public affairs journalism.

John McCullough, a 1955 Notre Dame alumnus, is a retired broadcast journalist, who is a member of both the Wisconsin Broadcasters Association Hall of Fame and the Milwaukee Press Club Hall of Fame. He began his career in television news at WNDU in South Bend.

From 2000 to 2006, Gerson served as policy advisor and chief speechwriter for President Bush. In 1999, he was a senior editor at U.S. News and World Report. He is the author of the bookHeroic Conservatism,published in 2007, and a frequent contributor to Newsweek magazine.