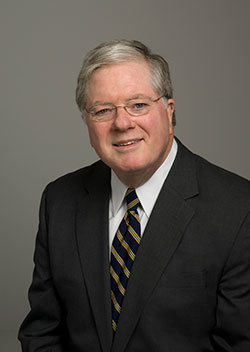 John F. Sturm, former president and chief executive officer of the Newspaper Association of America (NAA), has been appointed associate vice president of federal and Washington relations at the University of Notre Dame effective June 1.

“We are pleased that John Sturm has accepted the challenge of this newly established position,” said John Affleck-Graves, Notre Dame’s executive vice president. “His expertise in public policy and communications will help enhance the national and international visibility of Notre Dame’s work and mission.”

Sturm, a 1969 alumnus of Notre Dame who holds a law degree from Indiana University’s Maurer School of Law, will oversee a Notre Dame office in the nation’s capital. His responsibilities will include developing a federal relations strategy for the University and strengthening Notre Dame’s relationships with key constituencies in Washington, including the White House, Congress, federal agencies, regulatory bodies, media and alumni. While based in Washington, Sturm will often be on campus meeting with faculty and administration.

Sturm retired from the NAA presidency last year after 16 years at the helm of the newspaper industry’s largest trade organization. He had earlier served as NAA’s senior vice president of public policy and general counsel, often giving testimony before Congress and the Federal Communications Commission.

Before joining the NAA staff, Sturm worked in the Washington office of CBS as its vice president for government affairs. He also worked with NBC as senior counsel in Washington and served in several capacities at the Federal Communications Commission.