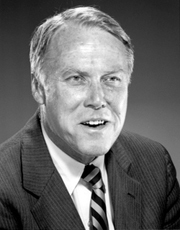 Judge John T. Noonan Jr., the 1984 recipient of the Laetare Medal, has accepted an invitation to deliver an address in the spirit of the award at Notre Dame’s 164th University Commencement Ceremony on May 17. His speech will be in lieu of awarding the medal this year.

“In thinking about who could bring a compelling voice, a passion for dialogue, great intellectual stature, and a deep commitment to Catholic values to the speaking role of the Laetare Medalist – especially in these unusual circumstances – it quickly became clear that an ideal choice is Judge Noonan,” said Rev. John I. Jenkins, C.S.C., president of Notre Dame. “This commencement ceremony, more than anything else, is a celebration of our students and their families. Judge Noonan will join with President Obama and other speakers in that celebration, sending them from our campus and into the world with sound advice and affirmation.

“Since Judge Noonan is a previous winner of the Laetare Medal, we have decided, upon reflection, to not award the medal this year.”

Noonan was appointed to the U.S. Court of Appeals for the Ninth Circuit in 1985 by President Ronald Reagan.

Noonan has served as a consultant for several agencies in the Catholic Church, including Pope Paul VI’s Commission on Problems of the Family, and the U.S. Catholic Conference’s committees on moral values, law and public policy, law and life issues, and social development and world peace. He also has been a governor of the Canon Law Society of America, and director of the National Right to Life Committee.

A Boston native, Noonan was graduated from Harvard University in 1946, studied English literature at Cambridge University for a year, and returned to this country to earn master’s and doctoral degrees in philosophy from the Catholic University of America. Noonan received his J.D. degree from Harvard Law School in 1954 and went on to serve on the Special Staff of President Eisenhower’s National Security Council. He subsequently practiced law in Boston for six years.

Noonan’s long teaching career began in 1961 when he joined the faculty of Notre Dame Law School. He taught at Notre Dame from 1961 to 1966, also serving as editor of the Natural Law Forum, later the American Journal of Jurisprudence. He taught at the University of California Law School at Berkeley from 1966 to 1986. He also has been a visiting professor of law at the Angelicum in Rome, Notre Dame, Boston College, Harvard, UCLA, Southern Methodist University and Stanford. He has been the Oliver Wendell Holmes Jr. Lecturer at Harvard Law School and the Pope John XXIII Lecturer at Catholic University.

Noonan is the author of numerous books, including “A Church that Can and Cannot Change: The Development of Catholic Moral Teaching,” “Contraception: A History of Its Treatment by Catholic Theologians and Canonists,” “Power to Dissolve: Lawyers and Marriages in the Courts of the Roman Curia,” “Bribes,” “The Lustre of Our Country: The American Experience of Religious Freedom,” and “Narrowing the Nation’s Power: The Supreme Court Sides With the States.” He also has contributed essays, articles and reviews to such magazines and journals as Commonweal, The Tablet, The Wilson Quarterly, National Review, America, and The New York Times Book Review.

Mary Ann Glendon, Learned Hand Professor of Law at Harvard University and former U.S. ambassador to the Vatican, was selected as the 2009 Laetare Medalist but declined the honor.