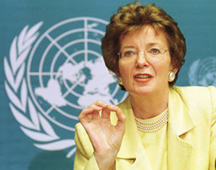 Mary Robinson, former president of Ireland and U.N. High Commissioner for Human Rights, will speak on the changing population of her country at 7:15 p.m. Oct. 14 (Sunday) in the University of Notre Dames Washington Hall.

Robinsons lecture is the keynote address for theRace and Immigration in the New Irelandconference hosted from Oct. 14 to 17 by Notre Dames Keough-Naughton Institute for Irish Studies.

The first woman to be elected to the Irish presidency, Robinson served from 1990 to 1997, when she resigned to become the United Nations High Commissioner for Human Rights.She served in her U.N. post until 2002.Since then, she has been honorary president of Oxfam International, chair of the International Institute for Environment, chair of the Council of Women World Leaders, and a European member of the Trilateral Commission.

TheRace and Immigrationconference will convene a wide variety of scholars, policymakers and representatives of ethnic communities to discuss issues arising from what has come to be called theNew Ireland,an island and nation profoundly changed in the last decade by economic prosperity, the reversal of its long history of emigration and the influx of hundreds of thousands of new immigrants from Eastern Europe, Africa and Asia.

In addition to Robinson, speakers at the conference will include John Haskins, the senior Irish government official responsible for immigration policy; David Begg, the general secretary of the Irish Congress of Trade Unions; Donncha OConnell, dean of the National University at Galway Law School; Piaras Mac Éinrí, University College Cork; Salome Mbugua, director of AkiDwA, the Irish African Womens Association; human rights activist Robbie McVeigh; Anna Lo, member of the Northern Ireland Assembly and the first East Asian elected to a European parliament; Ali Selim, secretary of the Islamic Cultural Centre of Ireland; Isabela Grawbowski-Lusinski of the University of Warsaw; journalist Patsy McGarry of the Irish Times; and Sean Óg Ó hAilpín, the Irish-speaking captain of the Cork hurling team, whose mother is from Fiji.

The conference also will host performances ofThe Kings of the Kilburn High Roadat 8 p.m. Oct. 16 and 17 (Tuesday and Wednesday) in the DeBartolo Center for the Performing ArtsDecio Theater.The play will be staged by Arambe Productions, Irelands first African theatre company and directed by Bisi Adigun, a Nigerian.

The conference is a Center for Social Concerns 25th anniversary event.

Further information and a full conference schedule may be obtained from the Keough-Naughton Institute Web site at http://www.nd.edu/~irishstu/ri.htm