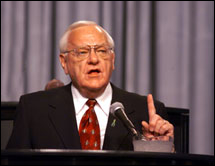 Former Illinois Gov. George Ryan will discuss his decision to commute the sentences of all inmates on the states death row in a talk Feb. 28 (Monday) at the University of Notre Dame.

TitledThe Death Penalty: A System of Justice&Reconciliation?the presentation will begin at7 p.m.in the Decio Mainstage Theatre of theDeBartoloCenterfor the Performing Arts. It is part of a series of events on and off campus titledLife in the Balance: Death Penalty Perspectives,which begins Wednesday (Feb. 23) and continues through March 2.

Once a proponent of capital punishment, Ryan changed his views after being convinced that the justice system was broken and could not be trusted with taking human life. He instituted the nations first moratorium on state executions in January 2000, and just before leaving office three years later, he commuted the sentences of all 167Illinoisdeath row inmates. A panel discussion on the death penalty inIndianawill follow Ryans presentation.

OtherLife in the Balanceevents on the Notre Dame campus, which are free and open to the public unless otherwise noted, are as follows:

Notre Dame sponsors ofLife in the Balanceare the Center for Social Concerns, Campus Ministry, Department of Film, Television and Theatre,DeBartoloCenterfor the Performing Arts, and the campus chapters of the Coalition to Abolish the Death Penalty, Amnesty International, and Right to Life.