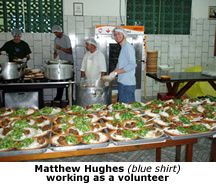 What he encountered was something that changed his life profoundly and sent him back toSouth Americaearlier this month for spring break.

A theology major, Hughes is minoring in Latin American studies and liturgical music ministry.He is especially interested in sacramental theology, or how and where we encounter the hand of God in the world, especially in the midst of difficult situations like poverty.For this reason, he participated in a poverty and development seminar inSantiago, in which he was involved in discussions about local social problems and possible remedies.He also volunteered each week at a high school in a poor section of Santiago, where he was struck both by the difficulties facing the Chilean education system and educatorsand community membersdedication to making things better by, for example, having students work to clean up the neighborhood and convert a local garbage dump into a plaza.

There was something compelling about these efforts,Hughes said.The school teachers and neighbors took a strong interest in the welfare and future of the community, clear examples of aspects of Catholic social teaching like solidarity and subsidiarity. I later learned the phenomenon was called community organizing, or relationships among community members forming the base for social action.

Back at Notre Dame, Hughes was still mulling over the concept when he met Dr. Zilda Arns Neumann, a Brazilian pediatrician who founded and leads Pastoral da Criança (the Pastoral of the Child), an innovative public health program that works with more than 265,000 volunteers to help poor families in her native country.She was on campus to receive the third annual Opus Prize in a ceremony last November.The $1 million prize is given annually to honor a person whocombines a driving entrepreneurial spirit with an abiding faith to combat poverty, illiteracy, hunger, disease and injustice.The award is presented by a Catholic college or university in partnership with the Opus Prize Foundation to provide students with inspiring exemplars of humanitarian work rooted in religious faith.

Hughesconversation with Neumann resulted in an invitation to visitSao Paulo,Brazil, for a first-hand look at the community outreach efforts of the Pastoral, which is precisely how he and junior Stuart Mora spent their spring break March 10 to 18.

Funded by aCollegeofArtsand Letters Learning Beyond the Classroom grant, they toured the city, met the leader ofSao Paulo’s Pastoral, accompanied Pastoral members on home-visits and talked with leaders of other community organizing efforts.

This has been an amazing opportunity that definitely happened as a result of my time abroad,Hughes said.Perhaps what I enjoy most about the concept of community organizing is its focus on the dignity of the human person and interpersonal relationships.Its definitely on my mind as I look beyond graduation in May.

Upon his return fromSao Paulo, Hughes learned he was accepted into Notre DamesAlliancefor Catholic Education (ACE) program, which provides college graduates an opportunity to earn tuition-free master of education degrees while serving as teachers in understaffed Catholic schools nationwide.For the next two years, he will beteaching a fourth grade class at theImmaculateConceptionSchoolinBrownsville,Texas, one mile from the Mexican border.

Looking forward to another chance to polish his Spanish, Hughes says 50 percent of his future students use student visas and travel across the border each day for class.He doesnt intend to pursue a career in teaching, but relishes another new experience and opportunity toencounter the hand of God.

I grew up on a farm, and these great opportunities have made me more independent,he said.They have helped me to see the world from a broader angle, and Im storing it all in my heart.