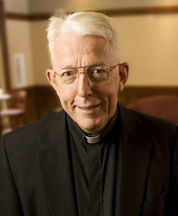 Rev. Edward A. Malloy, C.S.C., president emeritus of the University of Notre Dame, will receive his 24 th and 25 th honorary degrees and will deliver two commencement addresses at three ceremonies this month.

Father Malloy will return to his high school alma mater,ArchbishopJohnCarrollHigh School, inWashington,D.C., to deliver the commencement address at graduation ceremonies May 25 (Thursday). He was graduated from Archbishop Carroll in 1959.

During Father Malloys 18 years as president from 1987 to 2005, Notre Dame experienced rapid growth in its reputation due to substantive improvements in the size and scholarly credentials of its faculty, the academic quality and diversity of the student body, and its financial resources and physical infrastructure.