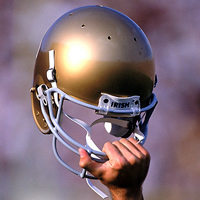 Notre Dame is home to the most valuable college football franchise in the country, and also the most philanthropic, providing support to University academics that is unparalleled in higher education and one of largest influxes of money to its host community.

The conclusions are reported in a study conducted by columnists at Forbes magazine and released in late December as bowl season began.

Forbes columnists Jack Gage and Peter J. Schwartz valued the Fighting Irish program at $97 million. They set the value of the Texas Longhorns in second place at $88 million, followed byGeorgia$84 million,Michiganat $81 million andFloridaat $76 million. TheUniversityofSouthern Californiadid not earn a spot in the survey, which evaluated the top 15 most valuable programs. The story and full survey is available in the ND in the News section of the Universitys news and information Web site: http://newsinfo.nd.edu/ .

According to the survey, Notre Dame returns $23.2 million to support the Universitys academic programs – more than four times that of LSU, which was second in this category at $5.1 million, and more than the combined contributions of the next 11 universities. Notre Dame athletic department support to the academy includes scholarships to both student-athletes and non-athletes, the latter of whom have received tens of millions of dollars in financial aid that has come from the Universitys television contract with NBC. The University Libraries and Jordan Hall of Science are examples of recent academic program beneficiaries of athletic department funds.

In an interview with the Universitys faculty-staff newspaper ND Works, Gage explained that support athletic program support of the academy is rare. Typically, the athletic department is self-supporting and operates independently of the academic enterprise. If money moves from the athletics coffers to academics,its usually for scholarships for student-athletes,Gage says.

The most interesting thing about Notre Dame specifically is the football program is at the mercy of the university. It absolutely is,Gage said, describing a point the University administration often makes, but that seems clearer when explained by an outsider: Sports revenue goes into the general University kitty; athletics is budgeted a portion.The athletic department only gets what the university approves.

Professional teams are regularly valued because they are bought and sold.No ones buying a stake in the Fighting Irish, whereas the New York Knicks could change hands tomorrow,said Gage, who is not an alumnus and has no alumni friends to inspire or influence this work.

Gage says the reporters developed the methodology for this first-time survey after interviewing athletic department representatives and chambers of commerce staffs, and by reviewing a number of research papers addressing the economics of college football.

Some potential measures proved too soft. For example, the benefitFloridawill receive as a result of winning the national championship?We decided to quantify by the hard, trackable dollars,Gage said.

Our biggest surprise was the contribution these programs make to the community,he said.Its really impressive to us the amount of economic activity these teams generate. Even in the bigger cities and counties it was significant.

With an economic impact of $57 million on the local community, Notre Dame was second only to the Universities of Texas andAlabama, both at $59 million.