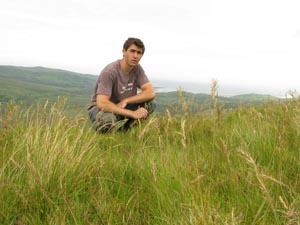 University of Notre Dame senior Brian Boll has changed his major several times: First it was anthropology, then English, then philosophy, followed by medieval studies.

“I always was, and still am, interested in too many things, but there’s one interest that’s always seemed to get the upper hand: language, languages and their study.”

Specifically, study of the Irish language.

“Since the beginning, I had always taken Irish language classes. I even got a scholarship from Notre Dame’s Irish department, after doing the first two semesters of beginning Irish classes, to go to the west of Ireland and do a language-immersion program in the summer after my freshman year,” says Boll, who has settled on a self-designed major called “Irish Cultural and Language Studies.”

Boll regularly attends extra meetings outside of class, held by Irish professors and conducted in Irish, for students who want to discuss class material in the original language. He also opts to read, write and speak in Irish even for classes that don’t require it.

It’s not surprising, then, that this “Irish O’Phile” was named among the top tweeters (@bhriain) of the Irish language by Indigenous Tweets, a website created by Kevin Scannell, a computer science professor at St. Louis University and specialist in computational linguistics and language use online.

Scannell’s hope is to “make it easier for speakers of indigenous and minority languages to find each other” and help build online communities through Twitter.

“Brian’s success at Twitter speaks not only to his generation’s ease with technology, but also to the growing role of technology in the foreign language classroom, says Brian O’Conchubhair, associate professor of Irish language and literature.

“No longer just a glib line — we use technology in our language class, and Brian shows how language learning and communication have been combined successfully and meaningfully on the ND campus. “

Currently, Boll is number 76 out of the top 500 tweeters in Irish for total number of tweets in the language. In 2011, Boll tweeted 740 times in Irish.

“I think it’s a good thing I’m not spending the time online to work my way to the top of the list,” Boll adds.

The nature of those Irish tweets?

“For the most part, I tweet about current events and things in Irish, and discuss stuff in Irish with other Irish speakers I’ve come across on Twitter. By current events I mean news about things I’m interested in, including plenty about the Irish language itself and the community surrounding all that…”

But not all his 720 Irish tweets addressed serious topics — in fact, several began with the phrase, “nil mé ag iarraidh …,” which translates loosely to “I don’t wanna …”

“I’m pretty sure there were days when I really wasn’t in the mood to go to work that day,” Boll says. “I’ve even tweeted about Notre Dame in Irish from my phone, complete with a camera phone photo!”

Boll’s passion for the Irish language even caught the attention of the main national Irish language radio station in Ireland, which contacted him about a blog post he had written on his hope to find a job in the Irish-speaking area of Ireland.

“Unfortunately, they didn’t let me know in advance that they’d be calling me at 5 a.m. Eastern time, so I missed their call.”

Guess the hashtag for that morning was #Ididn’twannagetup …