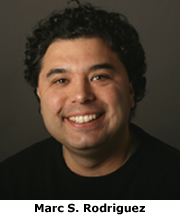 His mother was an Irish Catholic from Boston, his father a Mexican-American migrant worker. Fresh off his first job as a paperboy, Marc Rodriguez joined a Milwaukee grocers union at age 16. If asked to predict the future profession of this blue-collar young man, few observers would have forecast the academy. Yet Rodriguez always knew he wanted to be an agent of social change, and he found that opportunity as an assistant professor of history at Notre Dame.

A physician and aman of the classics,Rodriguezs maternal grandfather recognized the value of an education and guided his grandchildren to the professions or academia. Able to graduate from high school despite having worked in the fields from age 5, Rodriguezs father was the fortunate exception among his nomadic peers. Two worlds collided when his mother volunteered for a service project with migrant farm workers after collegeand met her future husband.

Witness to both the upper-middle and poor working classes, young Marc had a lot of questions about the world. What had led two people from such different backgrounds to the social protest movement of the 1960s? Why did his mothers family have so much and his fathers so little? Most important, what cultural dynamics led to the evident contrast between their two worlds?

These nagging questions combined with his familys focus on learning led Rodriguez into higher education. After brief stints as a lawyer and a professor at Princeton, he took a position teaching Mexican-American history at Notre Dame. Rodriguezs primary research and upcoming book focus on how diverse groups, from Mexican-American farm workers to student activists, shape the message of ethnic participation as Americans.

Dont forget where you came from,says Rodriguez, who finds that most undergraduates come into his class with little recognition of Mexican-Americans as a long-term community. Using his own family tree as a teaching tool, he shows how Mexican-Americans are not a new population, but in fact a multi-layered group with deep roots in the United States.

Students are not the only ones who can be unfamiliar with the society they live in; teachers can be naive as well. Rodriguezs constant criticism of the academy is that it fails to reflect the world around it. While many professors, especially at elite institutions like Princeton and Notre Dame, are often sons and daughters of former professors, Rodriguez brings a fresh perspective to academia. He takes pride in being a living example that social mobility can be realized through motivation.

For Rodriguez, motivation has never been in short supply. He completed his doctoral coursework before attending law school and then proceeded to write his dissertation on the weekends while working towards his juris doctor. While many would find this path unorthodox, he apparently found it helpful.My law classes shaped my dissertationthe legal training really helps me get to the point in both my writing and teaching,he says.

While he is a member of the Notre Dame Law School faculty, Rodriguez currently focuses on teaching history.I love classes with critical students who always have something to say and challenge me,he says. He particularly appreciates the religious discussion possible in a Notre Dame classroom, leading as it does to fruitful discourse that is lacking at many other institutions. Teachingsome of the best students he has ever taught,Rodriguez feels fortunate to have the opportunity to share his unique heritage with passionate young Notre Dame minds.