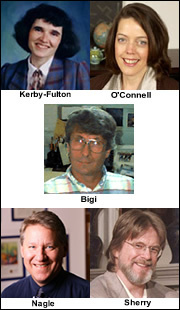 Five members of the University of Notre Dame faculty have been awarded endowed professorships.

The appointments bring the number of endowed chairs at Notre Dame to 204.

The newly appointed endowed professors are:

p. The Herrick Chair was funded by the late Kenneth Herrick and his father Ray, both of whom led Michigan-based Tecumseh Products Co., a manufacturer of compressors, engines, motors and pumps for air conditioners, refrigeration products, and lawn and garden equipment. The firm is now headed by Todd Herrick, a 1967 Notre Dame graduate.

p. The John N. Matthews Chair is the gift of Donald J. Matthews, a 1955 Notre Dame graduate and Life Trustee of the University, in honor of his late father, Capt. John N. Matthews, a former ship’s master and founder of a marine cargo firm inNew York.Established in 1967, the chair is Notre Dame’s oldest endowed professorship. **

p. The Robert and Marion Short Chair is a gift from the late Robert E. Short and his wife, Marion, ofMinneapolis. A longtime benefactor of Notre Dame, Robert Short served as a member of theLawSchooladvisory council from 1974 until his death in 1982. A former owner of the Los Angeles Lakers basketball team and the Washington Senators baseball team, he also served as treasurer of the Democratic National Committee. The Shorts had seven children, five of whom earned a total of 10 Notre Dame degrees. Their son Brian is a member of the University’s Law School Advisory Council.

p. The Grace-Rupley II Chair in Physics honors Joseph Grace and Allen Rupley, both former chairmen of the board of W.R. Grace&Co., a diversified company.