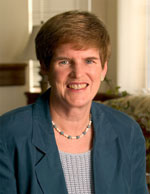 Eileen Kolman, dean of the First Year of Studies (FYS) at the University of Notre Dame since 1990, will retire next year, the Universitys provost, Nathan O. Hatch, announced.p. “For the past 14 years, Eileen has led what is universally regarded as one of the flagship programs for first year students in higher education,” Hatch said. “We thank her for her service to the University, her leadership in the FYS, and her dedication to Notre Dame students.”p. The Academic Council will elect a committee, chaired by Hatch, to search for Kolmans successor.p. Since its creation in 1962, the FYS has provided Notre Dame students with the foundation for a liberal education. Regardless of their intended program of study, all first-year students must enroll in the FYS, which enables them to study broadly in the arts and sciences and to consider various possibilities before deciding upon a college or major. In addition to advising students on course selection, FYS staff members use a variety of support services to ease the transition from high school to university life.p. FYS is largely responsible for Notre Dames 98 percent student retention rate from the freshman to sophomore years, and it contributes to the Universitys 95 percent graduation rate, a standard exceeded only by Harvard, Princeton and Yale Universities.p. Among Kolmans many contributions over the past 14 years was the establishment of the University Seminars – required classes taught by full-time faculty from different academic disciplines which encourage first-year students to pursue their interests while working on writing and reading skills – the improvement of the first-year composition program, and the development of collaborative learning groups to supplement the teaching of mathematics and the sciences. Kolman also changed the FYS name – from Freshman Year to First Year of Studies – to emphasize its content and to make the name more suggestive of its constituency.p. During Kolmans tenure, FYS repeatedly has been recognized as outstanding among such programs in the nation. U.S. News&World Report has ranked the Notre Dame first-year program among the best, and Hispanic magazine, which recently rated the University one of the countrys top 10 for Latinos, noted that “freshmen enter one of the most extensive academic and counseling programs of any university in the nation.” FYS was cited this spring in the Lumina Foundations Focus magazine for its extraordinarily high retention rate, and the Policy Center on the First Year of College ranked Notre Dame in its top 25. In addition, the FYS peer advising program will be one of 14 featured later this fall in a National Academic Advising Association monograph, “Peer Advising: Exemplary Practices in the Field.”p. Kolman joined the Notre Dame faculty in 1989 and, prior to her appointment as dean of FYS, served for one year as an associate provost with responsibilities for womens concerns, academic affirmative action, faculty grievances and appeals, ROTC, and the needs of handicapped students. A concurrent assistant professor of mathematics, she also has taught finite mathematics.p. Kolman taught mathematics and served as associate dean and coordinator of institutional planning at the College of Mount St. Joseph in Cincinnati from 1986 to 1989. From 1983 to 1986 she worked in institutional planning at Elmhurst College in Illinois and in the office of graduate studies at Loyola University of Chicago. She was dean of students at St. Xavier College in Chicago from 1980 to 1983, and held that and other administrative positions at Albertus Magnus College in New Haven, Conn., from 1972 to 1980. At Albertus Magnus she also taught in the department of religious studies and served as director of women’s studies.p. After having been graduated magna cum laude from Ohio Dominican College, she earned her master of education degree from Boston College and her doctorate in higher education from Loyola of Chicago.p.