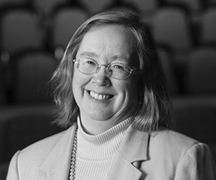 For many of us, the basement is sort of a merchandise purgatory, home to the items we dont really use anymore but still cant quite bring ourselves to throw out.

But when Susan Ohmer went digging through the basement ofNew YorkUniversitys library as a doctoral student, she came across something a little more valuable than rusting garden equipment or old issues of People magazine.

What she found – a four-reel microfilm set titledGallup Looks at the Movies- detailed how George Gallup, whose last name is today synonymous with opinion polling, pioneered audience research inHollywoodduring the 1930s and40s. His techniques guide moviemakers to this day.

I woke up in the middle of the night, and I said: Thousands of pages of stuff that nobody knows about, and its George Gallup?said Ohmer, the William T. and Helen Kuhn Carey Assistant Professor of Modern Communication at the University of Notre Dame.

Gallups involvement in the film industry became the focus of Ohmers dissertation, which won the Society for Cinema Studies Dissertation Award in 1998. This fall, her work will be published as a book,George Gallup inHollywood,by Columbia University Press.

Gallupserved from 1932-47 as director of research at the advertising firm Young&Rubicam, where Ohmer says he began to develop his polling techniques. He first put his methods on public display in the months leading up to the 1936 presidential election, when, against popular opinion and a popular magazine of the day, the Literary Digest, he predicted a win for Franklin D. Roosevelt.

He actually made a national challenge in the pages of the Washington Post,Ohmer said.In the July before the election, he did a pilot survey mimicking the Digest, and he said: This is what the Digest will tell you that will happen. This is why they are wrong, and I am going to take them on.

Gallups poll saidRooseveltwould win reelection, while the Literary Digest – which had mailed more than 10 million questionnaires and received a huge 2.3 million-person response – claimed it would be Alf Landon by a wide margin.

Within three months ofRoosevelts victory, the Literary Digest was out of business, and, in the process, a star was born.

That made him so famous thatHollywoodpicked up on it,Ohmer said.

Gallupdidnt pursue this information in isolation from his political queries, Ohmer found. Rather, questions about things like voting habits and double features could be found in the same poll.

Many of the techniquesGallupdeveloped for audience research are still used in some form today, the most prevalent of which is the invitational preview. In this arrangement, people from the target demographic group are invited to an advanced screening of a film and asked to complete questionnaires about what they liked or disliked.

Ohmer says that likeGallups polls, modern surveys frequently seek to determine what should be emphasized in the films advertising and which scenes should be cut.Gallupoften took the process a step further, adapting a dial device created for radio that allowed the audience to register their opinions on each scene as they viewed the film. Such audience devices are still used in television today.

The wayGallups work affectedHollywoodand revolutionized moviemaking is perhaps nowhere more apparent than in the case ofAmericas favorite cartoon kingdom. Disney subjected every film it made from 1946-52 to aGalluppreview.

In writing her book, Ohmer talked with the animators onFantasiaandCinderella,who were angered by what they felt was Disney usingGallups tools to boil their creative work down toenjoyment rankings.