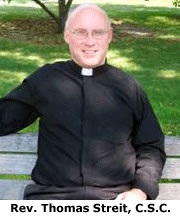 Rev. Thomas G. Streit, C.S.C., director of the University of Notre Dames Haiti Program, has been named to the inaugural class of ambassadors in the Paul G. Rogers Society for Global Health Research.

The class, which was selected by an advisory council that included three Nobel laureates, consists of 27 of the nations foremost experts in global health and represents a spectrum of the nationsscience advocates.

The Rogers Society is named for a formerFloridacongressman who is a renowned proponent of research to improve health. Research!America, an alliance for discoveries in health, launched the society to increase awareness of, and the make the case for greaterU.S.investment in, research to fight diseases that disproportionately affect the worlds poorest nations. The Rogers Society was established with funding from the Bill&Melinda Gates Foundation.

After earning his doctorate, he accepted a postdoctoral position with the Centers for Disease Control and Prevention (CDC). Posted toHaiti, he conducted research on the transmission and control of lymphatic filariasis (LF), a mosquito-borne infection that affects more than 120 million people throughout the tropics. He also helped establish, as the first full-time CDC staff director inHaiti, what is now an international reference center for LF at theHolyCrossHospitalin Leogane.

Father Streit joined the Notre Dame faculty in 1997 as an assistant research professor of biological sciences and established the Universitys Haiti Program, an initiative at the forefront of a global alliance of partners collaborating to reach the goal of eliminating LF.

Due in large part to the success of the Haiti Program, the Gates Foundation awarded Notre Dame a $5.2 million grant in 1999 to develop a model program for the global elimination of filariasis. More than 2.5 million treatments for filariasis and associated conditions have been delivered by the Haiti Program thus far, and the country is on track toward the historic goal of eliminating LF by 2013.