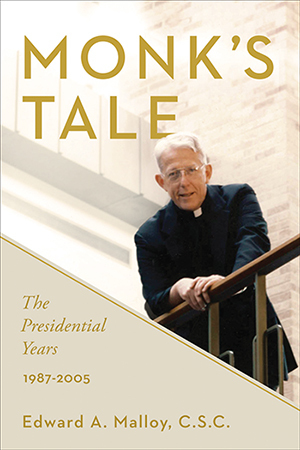 Rounding out the Monk’s Tale autobiography introduced by “The Pilgrimage Begins: 1941-1975” in 2009 and continuing with “Way Stations on the Journey” in 2011, the third volume is Father Malloy’s account of the 18 years he served as Notre Dame’s 16th president before retiring from that post in 2005.

When Father Malloy formally assumed the Notre Dame presidency on July 1, 1987, he succeeded his friend and brother Holy Cross priest, Rev. Theodore M. Hesburgh, C.S.C., whose iconic 35-year tenure in that office was an unenviably tough act to follow. Although grateful that “Ted had done me the generous service of being away from the campus during most of my first year as president,” Father Malloy resolved “that the greatest compliment I could pay Ted was to build on what he had helped to establish over 35 years and to sustain the momentum.”

That compliment to his predecessor was paid amply by Father Malloy during subsequent years as he oversaw a considerable enhancement of Notre Dame’s reputation, substantive improvements in the size and scholarly credentials of its faculty, a strengthening of the academic quality, diversity and selectivity of its student body, and a dramatic growth of its endowment. Three years into Father Malloy’s presidency, in an article in the Chronicle of Higher Education, Notre Dame’s then-provost Timothy O’Meara, who had served both with Father Hesburgh and with Father Malloy, could describe the changes the latter had brought to Notre Dame’s administration as “evolutionary rather than revolutionary.”

The third installment of “Monk’s Tale” gives a straightforwardly chronological and detailed account of the evolution, assigning one chapter to each of the 18 years of Father Malloy’s presidency. Confiding to readers his “efforts to find a comfortable balance among my various roles as president, professor, writer, liturgical leader, pastor, Holy Cross community member and public speaker,” Father Malloy provides an account of a successful balancing act while presenting a unique and absorbing ship’s log of two crucial decades in Notre Dame’s history.

In the 18th and final chapter of “Monk’s Tale,” Father Malloy concludes a reflection on his legacy this way: “It may seem odd for me to say this about being president of Notre Dame, but it was fun.”

For most readers of Father Malloy’s autobiography, it really won’t seem odd at all.