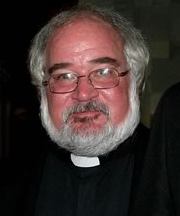 Rev. James E. McDonald, C.S.C., rector of Saint Georges College in Santiago, Chile, has been appointed executive assistant to the president in the administration of the University of Notre Dames president-elect, Rev. John I. Jenkins, C.S.C.

“Father Jim McDonald is a highly accomplished administrator and dedicated Holy Cross priest,” Father Jenkins said. “He holds advanced degrees in theology, literature and law; is fluent in Spanish and French; was a very effective associate dean in our Law School; and has completed an extraordinarily successful tenure as head of one of Chile’s most prominent schools. We are most fortunate to have him in our office, and I am grateful for his willingness to serve.”

After completing his term as rector at the end of February, Father McDonald will assist in the transition in the Presidents Office. After taking a short sabbatical, he will begin in his new position in July.

Father McDonald was graduated from Notre Dame in 1979 with a bachelors degree in the Program of Liberal Studies and in Spanish, and he began his preparation for the priesthood that same year. He was ordained in Notre Dames Basilica of the Sacred Heart in April 1984, and a month later he completed his master of divinity degree. After a year of teaching and residence hall ministry on campus, he entered Cambridge University in Great Britain (Magdalene College), completing a masters degree in Spanish and French literature in 1987.

Father McDonald assisted from 1987 to 1990 at Saint Georges College with the first Holy Cross administration after the military intervention in 1973. He then returned to the United States and entered the Columbus School of Law at the Catholic University of America, earning his juris doctor degree in 1994.

As rector (headmaster) of Saint Georges College, Father McDonald oversees the administration of a private, co-educational school for 2,600 children between kindergarten and the senior year of high school. In his time as rector, the school has focused on major improvements in the academic and Campus Ministry programs, as well as a systematic reorganization of the physical plant. Saint Georges College, sponsored by the Indiana Province of the Congregation of Holy Cross since 1943, is one of the distinguished private schools in Chile.

Father McDonald was formerly associate dean for administration of the Notre Dame Law School, managing the school’s $30-million-plus operating budget, including its student financial aid resources. He also supervised its admissions office and the Law Schools administrative personnel and assisted with University Relations and the Provost’s Office in developing Notre Dame’s presence throughout Latin America and the Caribbean. Fluent in French and Spanish, he has traveled extensively in recent years throughout Latin America with Notre Dames current president, Rev. Edward A. Malloy, C.S.C., and other officers of the University.

Before joining the Law School, Father McDonald served from 1994 to 1997 as assistant provincial and provincial steward of the Indiana Province of the Congregation of Holy Cross.

Father McDonald is a native of the Hudson Valley region of New York.