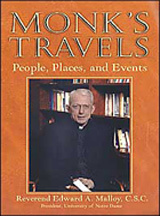 Rev. Edward A. Malloy, C.S.C., has circumnavigated the globe for the past 17 years as the University of Notre Dames president – from the Holy Land to Ireland, Chile to Iceland, Tibet to Ground Zero.p. In “Monks Travels: People, Places, and Events,” a new book published by Andrews McMeel, Father Malloy recounts his impressions of the places he has visited and the people he has met in more than two dozen nations and locations worldwide. The book is the product of the diaries he has produced in the aftermath of his many presidential journeys.p. In the preface, Father Malloy writes: “Ann Tyler wrote a novel entitled The Accidental Touristthat is about a man who is forced to travel but does not want to have any new experiences. He wants to guarantee his safety and security by making sure that everything is predictable and familiar. My goal on my trips was just the opposite: not to do anything too foolish, but to be open to an endless round of new experiences and possibilities.”p. Father Malloy begins the book with memories of what he calls the most significant event of his more than 40 years at Notre Dame: a Mass on the afternoon of Sept. 11, 2001, on the South Quad in remembrance of the victims of that mornings terrorist attacks on America. He goes on to describe his first visit to Ground Zero a month later, writing: “I felt the same way at the World Trade Center as I have felt at the battlefields of Gettysburg or Chancellorsville or Manassas/Bull Run: This is indeed sacred ground, and we honor the dead by being present at the place where they lost their lives.”p. The book continues with Father Malloys recollections and observations from his travels through Europe, the Mediterranean region, Eastern Europe, Latin America, South America, Africa, Australia and New Zealand, and the Far East.p. Father Malloy closes the volume with short reflections on some of the noteworthy people he has met in his travels, including Pope John Paul II, Presidents George H.W. Bush and George W. Bush, President Carter and his wife, Rosalyn, and Donald Trump.p. Notre Dames president since 1987, Father Malloy recently announced his decision to step down at the end of his current term, June 30, 2005. Under his direction, the University has experienced rapid growth in its reputation due to substantive improvements in the size and scholarly credentials of its faculty, the academic quality and diversity of the student body, and its financial resources and physical infrastructure.p. Father Malloy is a professor of theology and, throughout his presidency, has continued to teach. Ordained a priest of the Congregation of Holy Cross in 1970, he holds three degrees from Notre Dame and a doctorate in Christian ethics from Vanderbilt University.p. Father Malloys academic concentration on the interplay of personal morality with public policy and professional ethics informs his own active public life. Throughout his presidency he has worked nationally and locally to combat substance abuse and to promote volunteerism.p.