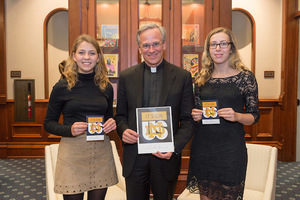 Rev. John I. Jenkins, C.S.C., president of the University of Notre Dame, signed the “It’s On Us” pledge Thursday (Oct. 27) in a ceremony in his office. He was joined by Becca Blais and Grace Watkins, the student government vice president and University policy liaison, respectively.

Created by the White House in September 2014, “It’s On Us” is an awareness campaign to help put an end to sexual assault on college campuses. The Notre Dame initiative began four months later and includes a video in which Father Jenkins and others appear.

“We’re all responsible for creating an environment where all are safe and the dignity of each person is respected,” Father Jenkins said. “Sexual assault has no place at Notre Dame, and it will only be eliminated if we each do our part individually and work together collectively.”

The campaign’s pledge calls on students, faculty, staff and administrators to make a personal commitment to help keep woman and men safe from sexual assault by committing to: