In his opening remarks for “Land O’Lakes and Its Legacy,” on Sept. 5 (Tuesday), Notre Dame President Rev. John I. Jenkins, C.S.C., suggested that among the essential activities of a university is to engage in discussion and debate about what its proper activities are.

Tuesday’s examination, co-hosted with the Cushwa Center for the Study of American Catholicism, included a lecture and panel discussion with four other Catholic university presidents in commemoration of the 50th anniversary of the drafting and signing of the Land O’Lakes Statement.

Crafted in a 1967 gathering organized by Rev. Theodore M. Hesburgh, C.S.C., — then-president of Notre Dame and the International Federation of Catholic Universities — the Land O’Lakes Statement is regarded as an important articulation of the character and nature of modern Catholic universities as informed by the teachings of the Second Vatican Council.

John T. McGreevy, I.A. O’Shaughnessy Dean of Notre Dame’s College of Arts and Letters and professor of history, opened the event with a talk on the historical contexts of Land O’Lakes. He pointed to the impact of Vatican II, shifts in university and faculty governance and a more global Church as essential backdrops for understanding the intentions of Land O’Lakes.

“Land O’Lakes insists that Catholic institutions must engage the world,” McGreevy said. “Viewed 50 years on, a focus on engagement — not capitulation — has aged well. Engagement presumes that the modern world, including the modern research university, is fundamentally good and worthy of such engagement. And it presumes that Catholic universities might both offer something to this world and learn from it.”

Father McShane of Fordham noted that Land O’Lakes was in keeping with the aims of his university’s founder, John Hughes, an Irish immigrant who later became archbishop of New York. McShane said that Catholic universities have been essential for preserving the faith and equipping the immigrant population to become excellent in ways recognizable to American society.

“At moments in history, the Church had to understand excellence in culture as an apostolic virtue,” he said.

For Julie Sullivan, the first lay and first female president of the University of St. Thomas, the nature of a “Catholic university” is in the words. While debates over Land O’Lakes tend to champion either “Catholic” or “university” as dominant over the other in a noun-modifier relationship, Sullivan emphasized the need for an integrated phrase and suggested this model as a way forward in an increasingly polarized climate.

“The Catholic university should be a community of inclusion, encounter and accompaniment where we view others not through our own limited lens, but as God sees them,” she said.

Father Leahy of Boston College discussed the importance of Catholic institutions of the 1960s moving from boards exclusively composed of clerics and religious to being predominantly laity, especially for ensuring better representation of interests and concerns within the university and strengthening its ability to raise funds and friends.

He added, “Where I hope we will make strides is in describing how the Catholic university in 2017 can be a meeting place between faith and culture — mediating the Church to modern culture and modern culture to the Church.”

Trinity Washington University President Patricia McGuire pointed to the day’s headlines on the discontinuance of the DACA program as a timely example of where Catholic higher education may publicly act in alignment with its mission. She noted that the 1967 Land O’Lakes meeting took place in a time of war, nuclear threats and racial strife not unlike the present and that now is a moment to open Catholic institutions even wider to the human community in need, especially those of low-income background, students of color and the disenfranchised.

“We earn credibility for our voices when we are able to be advocates for all people,” McGuire said. 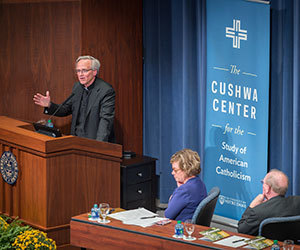 In his closing remarks, Father Jenkins noted that debates over the nature of Catholic universities are nothing new: Even medieval universities were fraught with controversy, in part because religious orders were grappling with how to read the writings of rediscovered ancient philosophers in light of Christian doctrine.

“The role of the Magisterium is to speak with clarity on the teachings of the faith,” he said, “The role of universities is to offer clarifying questions. And that dialogue between faith and reason in the Catholic Church is not a problem; rather, that’s been its strength over two millennia.”

The key, he added, is to make that dialogue fruitful.