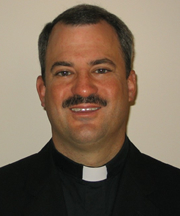 Rev. Peter A. Jarret, C.S.C., rector of Keough Hall, has been appointed superior of the Holy Cross community at Notre Dame, according to Rev. David T. Tyson, C.S.C., provincial superior of theIndianaProvinceof the Congregation of Holy Cross.

In addition to ministerial responsibility for the nearly 80 Holy Cross religious at Notre Dame, Father Jarrets position, which becomes effective in July, will require his service as a Trustee and Fellow of the University.

Father Jarret, who has served as rector of Keough since 2001, teaches a course in Notre Dame’s master of divinity program and serves as a member of the Congregations provincial council and of theUniversityofPortlands Board of Regents.He also served as counselor to Rev. Edward A. Malloy, C.S.C., then Notre Dame’s president, from 2003-2005.

BornJune 1, 1964, inProvidence,R.I., Father Jarret was graduated from Notre Dame in 1986 and entered the Congregation of Holy Cross the following year. He received a master of divinity degree from Notre Dame in 1991 and was ordained a priest in the Basilica of the Sacred Heart onApril 25, 1992.

From 1991-95, Father Jarret served at Christ the King Parish in South Bend as a deacon and associate pastor, and as pastor at St. Pius X Parish in Granger from 1995-2001, when he returned to Notre Dame.

Father Jarret is the youngest of seven children. His father, older brother, two nephews and two nieces are all Notre Dame graduates.