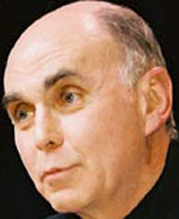 Rev. J. Bryan Hehir, president and treasurer of Catholic Charities for the Archdiocese of Boston, has been awarded the University of Notre Dame’s Laetare Medal for 2004. He will receive the medal, the oldest and most prestigious honor given to American Catholics, during the University’s 159th Commencement exercises May 16 (Sunday).p. “Father Hehir has been exemplary in ministry, scholarship and administration alike,” said Notre Dame’s president, Rev. Edward A. Malloy, C.S.C. “In honoring him and his service, we wish to refresh our vision of and renew our commitment to a just and compassionate society rooted in the dignity of all people.”

A priest of the Boston archdiocese, Father Hehir was ordained in 1966 and served as an assistant in St. Elizabeth of Hungary Parish in West Acton and pastor of St. Paul’s in Cambridge. He also taught at St. John’s Seminary in Brighton.

Before his most recent appointment last January, Father Hehir had served as president and chief executive officer of Catholic Charities USA since 2001. He had been on the faculty of Harvard Divinity School beginning in 1993 as a professor of the practice of religion in society. From 1998 to 2001, he was the first Catholic priest to lead Harvard Divinity School, forgoing the title of dean and residence in the dean’s mansion to demonstrate the priority of his duty to the church.

Prior to his years at Harvard, Father Hehir worked for two decades in Washington in what was then called the United States Catholic Conference (now the U.S. Conference of Catholic Bishops), as director of its international affairs office, secretary of its Department of Social Development and World Peace, and a counselor for social policy. From 1984 to 1992 he also served on the faculty at Georgetown University in Washington, specializing in ethics. He has been appointed the Parker Gilbert Montgomery professor of the practice of religion and public life at Harvard’s Kennedy School of Government, a position which he will assume this fall. A prominent scholar on the theory of just war, Father Hehir is regarded as the principal architect of the bishops’ influential 1982 pastoral letter on nuclear weapons, which called for reducing the nation’s nuclear arsenal.

Father Hehir is a member of the American Academy of Arts and Sciences, the American Philosophical Society, the Council on Foreign Relations, and the Catholic Theological Society of America. A 1984 MacArthur Fellow, he serves on the boards of several organizations, including the Arms Control Association and the Council for a Livable World. He has received more than 25 honorary degrees from various colleges and universities, including an honorary doctor of laws degree from Notre Dame in 1998.

The Laetare (pronounced Lay-tah-ray) Medal is so named because its recipient is announced each year in celebration of Laetare Sunday, the fourth Sunday in Lent on the Church calendar. “Laetare,” the Latin word for “rejoice,” is the first word in the entrance antiphon of the Mass that Sunday, which ritually anticipates the celebration of Easter. The medal bears the Latin inscription, “Magna est veritas et prevalebit”—“Truth is mighty, and it shall prevail.”