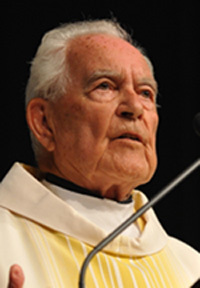 Rev. Theodore M. Hesburgh, C.S.C., president emeritus of the University of Notre Dame, will be recognized as an Honorary Navy Chaplain in a special ceremony at 5:45 p.m. April 17 (Wednesday) in the William J. Carey Auditorium of the Hesburgh Library.

Rear Adm. Mark L. Tidd, the 25th and current Chief of Navy Chaplains, will preside at the ceremony, which will honor Father Hesburgh both for his multifaceted career in higher education and public service and as “a distinguished leader who long wanted to serve his country in just that role — as a Navy chaplain.”

Father Hesburgh, who retired in 1987 after serving 35 years as Notre Dame’s 15th president, was ordained a priest of the Congregation of Holy Cross in 1943. He has often spoken of how, following his ordination, he had longed to serve as a Navy chaplain during World War II, but had been unable to do so because of his religious assignment to ministry at Notre Dame.

He also has spoken gratefully of the Navy’s place in Notre Dame’s history. “We were out of business during World War II,” Father Hesburgh said in a 1992 interview with the South Bend Tribune. “The Navy came in and kept us afloat until the war was over.”

During the war, Notre Dame opened four of its South Quad residence halls to the Navy for its V-7 program, also known as the Midshipmen’s School, and the Navy constructed a drill hall and a headquarters and classroom building on the north side of the campus, on the site of what is now the Hesburgh Library.