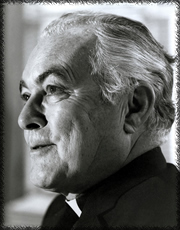 Created by Turner Broadcasting in 1993, the Trumpet Awards celebrate African-American achievement in the arts, science and politics. Father Hesburgh was honored for hispivotal role in helping to achieve equality and justice,according to the Trumpet Selection Panel chaired by Andrew Young, formerU.S.ambassador to the U.N. and mayor ofAtlanta.

Among the other Trumpet Award honorees this year were recording artist Nancy Wilson, tennis players Serena and Venus Williams, and civil rights activist and comedian and Dick Gregory.

Father Hesburgh, who was Notre Dames president from 1952 to 1987, has played an active and influential role in national and international affairs over the past half century. He has held 16 presidential appointments that involved him in virtually all major social issuesincluding civil rights, peaceful uses of atomic energy, campus unrest, treatment ofVietnamoffenders, andThird Worlddevelopment and immigration reform. Justice was the focus of many of his outside involvements. Perhaps most notably, he was appointed a charter member of the U.S. Commission on Civil Rights in 1957 and chaired it from 1969 to 1972, when President Nixon replaced him because of his criticism of the administration’s civil rights record.

Father Hesburgh is the recipient of 150 honorary degrees, the most ever awarded to one person.He was awarded the Congressional Gold Medal, the highest honor presented by the U.S. Congress, in 2000, and was honored in 1964 with the Medal of Freedom, the nations highest civilian honor.