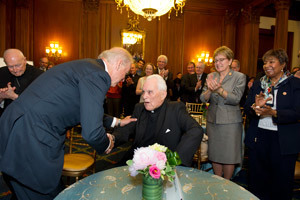 Pelosi co-hosted Father Hesburgh with Republican House Speaker John Boehner, who was expected but could not attend the 3 p.m. gathering. Both members of Indiana’s split-party U.S. Senate delegation, Dan Coats and Joe Donnelly, offered appreciative reflections. In all, it was a genuinely bipartisan affair that brought politicians and staffers from “both sides of the Capitol, both sides of the aisle and all sides of Pennsylvania Avenue,” Pelosi said.