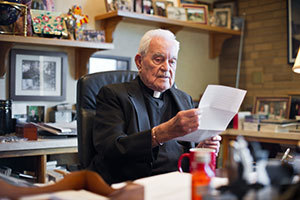 Father Hesburgh in his office, November 2011

On Friday afternoon, in his office on the 13th floor of the library named after him, Rev. Theodore M. Hesburgh, C.S.C., president emeritus of the University of Notre Dame, was enjoying an after-luncheon cigar and trying to solve an arithmetical problem in his head.

“If I’ve said Mass every day of the week for 70 years, that’s, let’s see. What’s 70 times 365? I don’t know, more than 25,000 Masses, anyway.” On Monday (June 24), Father Hesburgh would mark the 70th anniversary of his ordination, which took place in the Basilica of the Sacred Heart, whose spire, along with Notre Dame’s iconic Golden Dome, is splendidly visible from the window behind his desk. 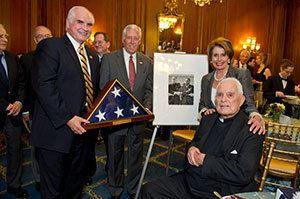 “I don’t think I’ll be doing anything special that day,” he said. “That thing in Washington a few weeks ago was nice enough.” The “thing” in Washington to which Father Hesburgh referred was a May 22 reception in the U.S. Capitol hosted by John A. Boehner, Speaker of the U.S. House of Representatives, and House Democratic leader Nancy Pelosi to celebrate his 96th birthday as well as his ordination jubilee.

“I suppose I’ll do what I do every day,” he said. “Have Mass and lunch at Holy Cross House, and then come over here to the office until six o’clock or so.” Father Hesburgh has lived at Holy Cross House, the retirement and assisted-living community for Holy Cross priests, since he retired after 35 years as president in 1987. “I’m the oldest guy in the whole doggone community,” he said, “and I’m the only guy over there who still gets up and comes to work every day.” 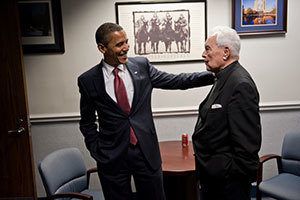 Father Hesburgh is indeed the oldest resident at Holy Cross House, and the longest-serving priest of the Congregation’s United States Province as well. Long regarded an elder statesman in American higher education, he holds 150 honorary degrees, the most ever awarded to one person. He also has held 16 presidential appointments involving most of the major social issues in his time, including civil rights, the peaceful use of atomic energy, campus unrest, treatment of Vietnam offenders, and Third World development and immigration reform. A charter member of the U.S. Commission on Civil Rights, he chaired the commission from 1969 to 1972, when President Richard Nixon replaced him as chairman due to his criticism of the administration’s civil rights record. He was the first Catholic priest elected to the Board of Overseers at Harvard University and served two years (1994-1995) as the board’s president. He also co-chaired from 1990 to 1996 the Knight Commission on Intercollegiate Athletics. In July 2000, Father Hesburgh became the first person from higher education to be awarded the Congressional Gold Medal. 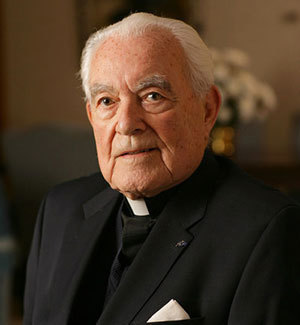 He talked about some of those things as he sat with a visitor amid the congenial clutter of the photographs, plaques and memorabilia generated by them, acknowledging them all with an appreciative but mildly dismissive, aromatic sweep of his cigar-bearing right hand. “I’ve loved my career, of course,” he said, “but all I’ve ever really wanted — and I mean since I was 6 years old — was to be a priest. If I could do it all over again, I’d do exactly the same thing.”

The waiting room outside his office was filling up with graduate students and a few women religious. In addition to keeping up on his voluminous correspondence and staying abreast of current events, Father Hesburgh keeps his office door open to a steady stream of visitors. “I’ll remember you and your family in my Mass on Monday,” Father Hesburgh promised as he bade his latest visitor farewell. “Honest,” he grinned, drilling his temple with an index finger as if turning a key in a lock. “I’ll remember to remember.”

The visitor has since done the arithmetic more precisely. That will be Mass number 25,550.