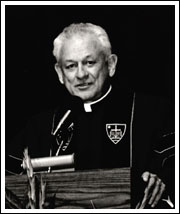 “Father Ned Joyce was a principal builder of Notre Dame in both the literal and figurative senses,” said Notre Dame President Rev. Edward A. Malloy, C.S.C. “He served Notre Dame and her people splendidly as a priest, administrator, and friend, and while we rejoice that he is now in the company of heaven, we will all keenly miss this irreplaceable man.”

Father Joyce retired in 1987 after serving 35 years as the chief financial officer of Notre Dame during the presidency of Rev. Theodore M. Hesburgh, C.S.C. The two priests took a long vacation immediately after their retirements, and Father Hesburgh wrote about the adventure and their friendship in his 1992 book “Travels with Ted&Ned.”

“Father Ned Joyce was my right-hand man for the entire 35 years that I was president of Notre Dame,” Father Hesburgh wrote. "It would be impossible to recount, even in cursory fashion, all the great things he did for Notre Dame during his 35 years as executive vice president. Without him, both the University and I would have been much diminished.

“When I was away, he was acting president, the man in charge. I traveled a lot, often for weeks at a time, but I never worried for a moment about how the university was doing in my absence. With Ned Joyce in charge, I knew I had nothing to worry about. He was … a man of impeccable moral character, shrewd judgment, rocklike fidelity, and unfailing dependability.”

Father Hesburgh was with Father Joyce for much of Saturday evening. “I gave him the last rites and we prayed the rosary together,” he said.

Links to other tributes to Fr. Joyce:
Tributes
“Travels with Ned”
Photo gallery

In 1945 he entered Holy Cross College in Washington, D.C., then the theological house of studies of the Congregation of Holy Cross. He was ordained to the priesthood June 3, 1949, by Bishop John F. Noll of Fort Wayne in Sacred Heart Church on the Notre Dame campus.

For many years, Father Joyce was an influential voice in the National Collegiate Athletic Association, particularly in matters dealing with the educational integrity of intercollegiate athletic programs. He also was instrumental in the formation of the College Football Association and served that organization as secretary-treasurer. The National Football Foundation honored Father Joyce with its Distinguished American Award.p. President Eisenhower appointed Father Joyce to the Board of Visitors of the United States Naval Academy, and the U.S. Air Force awarded him an Exceptional Service Medal. He received honorary degrees from the College of St. Thomas in St. Paul, Minn.; Belmont Abbey College in Belmont, N.C.; the University of South Carolina at Spartanburg; the University of Notre Dame; Our Lady of Holy Cross College, in New Orleans; and Wofford College in Spartanburg. Father Joyce was inducted into the Indiana Academy in June 1990. There are three endowed chairs established in his name at Notre Dame, and the University’s Athletic and Convocation Center is named in his honor.

After his retirement, Father Joyce served as honorary chair of the Badin Guild, a planned giving organization for benefactors who provide estate gifts to the University through bequests, trusts, life insurance or remainder interests in real estate. He also was a Life Trustee of the University.

Father Joyce is survived by a brother, Lyle.

A wake service will be held for Fr. Joyce Tuesday at 7:30 p.m. in the Basilica of the Sacred Heart on the Notre Dame campus, with Father Malloy presiding. Viewing will begin at 3 p.m. in the Lady Chapel of the Basilica. A Mass of Christian Burial will be held at 3:30 p.m. Wednesday in the Basilica. Rev. David T. Tyson, C.S.C., provincial superior for the Indiana Province of the Congregation of Holy Cross, will preside. Father Hesburgh will be the homilist, observing a pact made with his friend and colleague that whichever of them survived the other would draw that duty.

In lieu of flowers, gifts in honor of Father Joyce can be made to the Rev. Edmund P.Joyce, C.S.C., Fund for Notre Dame and be directed to the Father Joyce Fund at 1100 Grace Hall, Notre Dame, IN 46556.