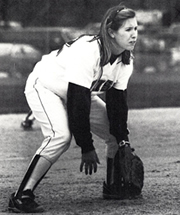 Linda and Paul Demo, the mother and stepfather of University of Notre Dame alumna Melissa Cook, have made a $3 million gift to the University for the construction of a new softball stadium in her memory.

The circumstances of this extraordinary gift are sobering, but the way in which it will honor Melissa is wonderful,said Rev. John I. Jenkins, C.S.C., Notre Dames president.We are most grateful to the Demos for this generous gift in memory of their daughter.

Cook was one of four people killed in March 2002 when a massive section of scaffolding fell from theJohnHancockCenteronto her car in downtownChicago. Cooks cousin, Jill Nelson, also died, and Linda Demo and Nelsons mother were among the seven people injured in the accident.

The families of those who died and were injured reached a settlement earlier this year with the skyscrapers owner and other companies named in a joint lawsuit. The Demos have devoted much of their portion of the settlement to the gift to Notre Dame and to their Melissa Cook Memorial Foundation, which will provide financial assistance to students fromNorthwest Indianato the college of their choice.

Melissa truly loved Notre Dame and also believed deeply in the value of athletic participation for women,said Linda Demo.Paul and I believe this gift is an ideal way to remember her and the deep commitment she had to the University and womens athletics.

Raised inMerrillville,Ind., Cook played for the Fighting Irish softball team in 1991 and92 at second base, shortstop and catcher. She led the team in triples as a freshman and earned one monogram. An accountancy major, she earned her bachelorsdegree in 1994 and was the controller for Teamsters Union Local 786.

Melissa Cook Stadium will be built on the southeast corner of the Notre Dame campus, near Eck Baseball Stadium. In accordance with University policies for new construction, work on the estimated $4.8 million facility will begin when the project is fully funded. The University is actively seeking additional funding for the project.

This very generous gift by the Demo family represents a wonderful memorial to one of our former student-athletes,said Kevin White, director of athletics.Having Melissas name on the stadium will be a fitting way to recognize her life.

The Notre Dame womens softball team is a perennial national power that finished this past season with a 42-21 record, a Big East Conference tournament championship, and an eighth straight NCAA tournament appearance.

The Demosgenerosity is incredible,softball coach Deanna Gumpf said.The stadium will contribute greatly to the future success of Notre Dame softball, and will be a lasting tribute to Melissa.I am excited to think that when people walk into the stadium they will see her __ name and learn her story.Melissas legacy will live on at Notre Dame.