A recent donation to the University of Notre Dame’s Airborne Aero-Optics Laboratory (AAOL) is about to give laser-directed energy and free-space communication a transonic boost: researching at the speed of sound. 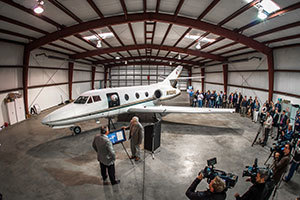 A Falcon 10 aircraft, donated by Philadelphia-area businessman Matthew McDevitt, will enable the University to continue its groundbreaking aerospace research and development that will advance technology for weapons systems and communications. The results could pave the way to high-field-of-regard, point-to-point airborne laser propagation for directed energy and communications as fast and robust as fiber-optic Internet connectivity. In other words, high-flying research at Notre Dame is not only helping to refine the U.S.’s weapons systems, but it could lead to a television show streaming just as fast on a commercial flight as it does in a living room.

Since the mid-1990s, aerospace engineering research has found its home at Notre Dame through the Institute for Flow Physics and Control’s Aero-Optics Group, directed by Eric Jumper, professor of aerospace and mechanical engineering. With support from the High Energy Laser-Joint Technology Office (HEL-JTO), Notre Dame faculty and researchers have been working with the Air Force Institute of Technology’s Center for Directed Energy (CDE) and MZA Associates Corp. to conduct studies focused on directed energy, specifically laser interactions with turbulence, or aero-optics.

The AAOL — one of the research programs within the Aero-Optics Group — has taken the lasers to the skies, studying the effects of turbulence on a laser directed from one aircraft to a turret installed on a tandem-flying aircraft about 50 meters away flying at transonic speeds.

“Planes have difficulty using lasers because even a tiny amount of turbulence can effectively turn a laser into a really expensive flashlight,” said Jumper. “Supported by funding from the HEL-JTO, we have developed aero-optic wave front beam-control architectures that overcome aircraft vibration and mitigate the effects of turbulence, which could enable such technologies as free-space communication.”

Beyond the obvious improvements to directed energy applications, the research will also lead to more than just in-flight streaming entertainment for bored airplane passengers. If brought to market, point-to-point airborne laser communications could improve transmissions between aircraft systems and other aircraft, satellites or ground stations and create a foundation for video feeds from unmanned flights over battlefields or disaster areas.

AAOL’s research has been conducted in wind tunnel labs on Notre Dame’s campus to simulate flight conditions, and in 2010 the team successfully completed laser-based testing in-flight on two leased Cessna Citations outfitted as sophisticated airborne aero-optics laboratories. The following series of in-flight tests helped ensure the performance of the aero-optic system developed at the University, but testing was required at higher Mach speeds — and the need for a Falcon 10 arose.

“To really continue our research, we needed to realize higher levels than we could achieve in wind tunnel studies and with previous aircraft,” said Jumper. “With a Falcon 10, we can conduct research at Mach numbers above Mach 0.8, providing an authentic environment that produces more accurate results than a simulated set-up.”

Growing up in a Catholic family and attending 12 years of Catholic school, McDevitt, who previously owned the aircraft for private use with his family, learned about the University’s need for a fast-flying jet and generously donated the aircraft. Since the donation, the Falcon 10 has been transformed into a high-speed, high-altitude flying lab, outfitted with the laser-tracking turret and additional aero-optic technology. And, with an engine protection program donated from longtime Notre Dame research partner and South Bend neighbor Honeywell Aerospace, the Falcon 10’s engines will be maintained at no cost to the University for six years.

“This dedicated plane allows the AAOL team to set up, troubleshoot and conduct complex experiments, which was not available when we leased aircraft one week at a time,” said Jumper. “This is about a $1.25 million gift, and without it we would certainly have a less robust program.”

During a recent visit to Notre Dame, McDevitt got a first-hand look at the aircraft since it was converted to a state-of-the-art component of AAOL’s aerospace research. To see a video with an inside look at how Jumper and his team are taking laser-directed energy to the skies with the Falcon 10 flying research lab, click here.