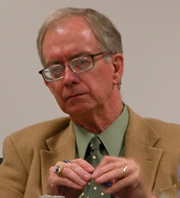 Last April, due to inclement weather, two Notre Dame teams found themselves unable to return to campus as planned. Track team members were stranded at OHare International Airport in Chicago, and the mens golf team had an event delayed. Both groups, and some rowing team members who missed a bus, faced unexcused absences from classes. They got on the phone and called Fernand “Tex” Dutile.

Dutile is a law professor, not a travel agent. He also is chair of the Faculty Board on Athletics, a committee that advises the president and is charged with maintaining the balance between academics and athletics. As chair Dutile handles issues that arise between the groups monthly meetings. He granted excused absences to the stranded athletes.

At Notre Dame, maintaining one of the nations highest graduation rates among student-athletes is in large part due to the work of a tutoring- and incentive-based academic support program, and to the hard work of the athletes themselves.

But its also due to the professors of science, engineering, liberal arts, law and business who comprise the faculty board, a group of 15 who dedicate vigilant attention to University and NCAA policies, and to small details such as unexpected absences. Dutile himself attends all head coaches meetings.

Conceivably, the boards work may be partly motivated by peer pressure. As Dutile points out, faculty who are unhappy with under-achieving athletes will call board members and complain. “I dont get many such calls,” he adds. (The board welcomes widespread attention and has launched a Web site, http://www.nd.edu/~facboard, to make its work better known.)

Among areas of oversight, the board approves competitive schedules, ensuring that students attend class, participate in freshman orientation and Commencement, and are able to attend religious services while on the road. The board vets and approves team captains. Fifth-year athlete candidates must submit proof that they will pursue a serious course of studies. Law school or a masters program is ideal; a smattering of non-degree electives is suspect.

Committee member Steve Fallon, associate professor of liberal studies, says hes been pleased to find the board “is not a rubber stamp but a group that asks hard questions, takes time to find answers, and makes recommendations and decisions that have a real and positive effect on the lives and studies of student-athletes.”

Umesh Garg, a physics professor, says service on the board has taught him “a tremendous appreciation for the stress that Notre Dame puts on the studentpart of the student-athlete.”

“Stress” is an apt choice of words, according to new member Eileen Botting, assistant professor of political science. Botting was a student-athlete in college, but one who chose to compete in a Division III school where it was natural to put academics first. At Division I schools like Notre Dame, such choices are more difficult, she acknowledges.

“Most of our student-athletes wont go pro. So we need to protect them, and their academic endeavors, from the over-professionalization of collegiate athletics,” she says.

Most board members are elected by faculty in their colleges or at-large. But Dutile has the leeway to recommend appointments, and the president often uses these to add the diverse voices of women and racial and ethnic groups. The one student representative is a former Notre Dame football player who was drafted by the pros: law student Bobby Brown. He brings to the table keen memories of the pressure, from coaches, other athletes and fellow students, to earn a degree.

Notre Dame has had a standing committee since 1898, and vigilant administrative support throughout. “It would be very hard to start something like this today,” Dutile says.

With 100 years of tradition at hand, Dutile finds that coaches are companions to the academic process. Speaking to the board in October, Dan Saracino, assistant provost for enrollment, looked puzzled when asked if hed experienced coach interference. “I dont feel any pressure from the coaches,” he said. “Theyre on the same page.”