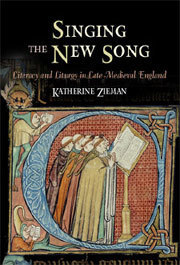 Katherine Zieman, assistant professor of English at the University of Notre Dame, is the author of a new book titledSinging the New Song: Literacy and Liturgy in Late Medieval England.

Published by University of Pennsylvania Press,Singing the New Songexamines the manner in which institutions and practices of the liturgy affected late medieval English understandings of the written word.

My book brings together three topics normally considered by different disciplines: liturgy, literacy and literature, of which liturgy perhaps is the most central,Zieman explained.Scholars of the Middle Ages have treated it as static, either idealizing it as an unchanging resource of community or demonizing it as a mindless, repetitive exercise.I show how the functions and even forms of liturgy changed both socially and economically in ways that could affect other areas of culture, such as literacy and literature in 14th century England.

Beginning with a history of the elementary educational institution known to modern scholars as thesong school,Zieman shows how liturgical and devotional texts profoundly influenced ancient literacy training and spiritual formation. These schools originated from an intention to provide liturgical training for literate adult performers who already had mastered the grammatical arts.From the late 13th century on they were increasingly devoted to the training of young boys as choristers. Because choristers needed to be trained before they received instruction in grammar, the liturgical skills of reading and singing took on a different meaning.