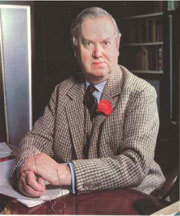 The Center for Ethics and Culture at the University of Notre Dame will sponsor a series of evening lectures on novelists Graham Greene and Evelyn Waugh from Monday through Thursday (Oct. 4-7) in DeBartolo Hall.p. The series, “The Disturbing Light of Reality: Sin and Redemption in the Writing of Graham Greene and Evelyn Waugh,” takes its title from Greenes remark in a 1978 interview with The New York Times Magazine that he wished to write prose as clear and plain as Waughs in order to allow the “disturbing light of reality” to shine through it.p. The first lecture, “Evelyn Waugh: The Priest as Craftsman,” by Ian Ker of Oxford University, will be given at 8 p.m. Monday (Oct. 4) in Room 136 DeBartolo Hall. Ker, who has taught English literature and theology in the United States and Britain, is a tutor in theology at Oxfords Campion Hall. Author and editor of 20 books on Cardinal John Newman, including Newmans definitive biography, he also is the author of “The Catholic Revival in English Literature, 1845-1961,” which recently was published by the University of Notre Dame Press.p. Ralph McInerny, professor of philosophy and director of Notre Dames Jacques Maritain Center, will give a lecture entitled “It Rhymes with Laugh: Humor in Waugh” at 7:30 p.m. Tuesday (Oct. 5) in Room 136 DeBartolo. In addition to having written some two dozen scholarly books on Thomas Aquinas, Soren Kierkegaard, and Jacques Maritain, and having lectured on ethics, the philosophy of religion, and medieval philosophy, McInerny founded, edited, and wrote for Crisis, a journal of lay Catholic opinion, and has written more than 50 novels, including the popular Father Dowling mystery series.p. The film “The Third Man,” a 1949 thriller whose screenplay was written by Greene, will be shown at 7:30 p.m. Wednesday (Oct. 6) in Room 138 DeBartolo.p. Thomas Hibbs, dean of the Honors College at Baylor University, will speak on “Graham Greene and Film Noir” at 7:30 p.m. Thursday (Oct. 7) in Room 131 DeBartolo. Hibbs, who received a doctoral degree in philosophy from Notre Dame in 1987, specializes in medieval philosophy, ethics, and the philosophy of popular culture. He also is the author of “Shows About Nothing: Nihilism in Popular Culture from The Exorcist to Seinfeld.”p. _Contact: Katrina Freddoso at 574 631-0492 or Freddoso.4@nd.edu _ p.