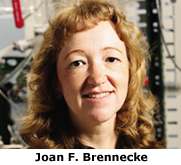 Joan F. Brennecke, Keating-Crawford Professor of Chemical and Biomolecular Engineering and director of the University of Notre Dames Energy Center, has been awarded the 2007 John M. Prausnitz Award for outstanding achievement in applied chemical thermodynamics by the Conference on Properties and Phase Equilibria for Product and Process Design.

The award, which was presented last month in Hersonissos,Crete, at the 11 th International Conference, cited her pioneering work in molecular thermodynamics of separations with ionic liquids (IL) and local composition effects on reactions in supercritical fluids (SCFs). She also presented a lecture titledIonic Liquids: Why Experimental Molecular Thermodynamics Matterat the conference.

A member of the Notre Dame faculty since 1989, Brenneckes research focuses on experimental aspects of thermodynamics and separations, with particular interest in supercritical fluids and ionic liquids. The author of numerous groundbreaking articles on the use of SCFs and ILs, her 1999 paper in the journal Nature launched a totally new area of molecular thermodynamicsone made up entirely of ionsto exploit ionic liquids. Her scientific papers in general are among the most highly cited in chemical engineering and physical chemistry.

Brennecke has received numerous awards for her research, as well as for her contributions in the classroom. Most recently, she received the Professional Progress Award from the American Institute of Chemical Engineers (AIChE). In 2003, she was awarded the James A. Burns, C.S.C., Graduate School Award in recognition of her outstanding contributions to research and graduate education at Notre Dame. Her effectiveness in the classroom earned her a Kaneb Teaching Award in 2002 and theCollegeofEngineering Teacherof the Year Award in 2000.

She also received the 2001 Ipatieff Prize from the American Chemical Society (ACS) in recognition of her high-pressure studies of the local structure of supercritical fluid solutions and the effect of this local structure on the rates of homogeneous reactions. In 1991, the National Science Foundation honored her with the Presidential Young Investigator Award.

Brennecke is a member of AIChE, the ACS and the American Society for Engineering Education. She currently serves on the editorial board of Green Chemistry and is chair of the Council for Chemical Research.

A graduate of theUniversityofTexas, Brennecke received her masters and doctoral degrees in chemical engineering from theUniversityofIllinoisat Urbana-Champaign in 1987 and 1989, respectively.