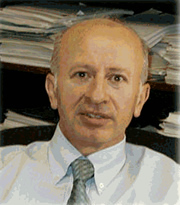 Samuel Paolucci, professor of aerospace and mechanical engineering at the University of Notre Dame, has been named a fellow of the American Society of Mechanical Engineers (ASME).

Fellow is the highest elected grade of membership in ASME and is conferred upon a member with at least 10 years of active engineering practice who has made significant contributions to the field.

A faculty member since 1989, Paolucci specializes in the study of fluid mechanics, focusing on laminar and turbulent natural convection in enclosures, stability of flows, nonlinear dynamical systems and chaos, two-phase flows, and analytical and computational solutions of partial differential equations. He earned his doctorate fromCornellUniversity. He also is a member of the American Physical Society, the Society for Industrial and Applied Mathematics and Sigma Xi, the scientific research society.

While less than 3 percent of the membership of the ASME are elected to fellow status, Paolucci is the 10th member Notre Dames aerospace and mechanical engineering faculty to be named a fellow. The others are: Hafiz M. Atassi, Thomas C. Corke, Patrick F. Dunn, Frank P. Incropera, Thomas J. Mueller, John E. Renaud, Mihir Sen, Albin A. Szewczyk, and Kwang-Tsu Yang.

Founded in 1880, ASME is a 120,000 member professional organization that focuses on technical, educational and research issues in the engineering and technology communities. ASME conducts one of the worlds largest technical publishing operations, holds numerous technical conferences worldwide and offers hundreds of professional development courses each year.