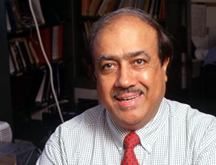 A member of the Notre Dame faculty since 1990, Kareem was cited foroutstanding original contributions to analysis, quantification, modeling and simulation of wind-load effects for structural design, achieved by merging the fundamentals of structural mechanics and fluid dynamics.

Kareem specializes in probabilistic structural dynamics, fluid-structure interactions, structural safety and mitigation of natural hazards. His research focuses on the environmental loads of wind, waves and earthquakes on structures, the associated dynamic behavior of the structures, and risk assessment.

In addition to developing models for predicting structural responses to environmental hazards, Kareem uses computer models and laboratory and full-scale experiments to better understand the impact of natural hazards on the constructed environment.

The Scanlan Medal is awarded in recognition of distinguished achievement in engineering mechanics based upon scholarly contributions to both theory and practice. It honors the late Robert H. Scanlan ofJohnsHopkinsUniversity.