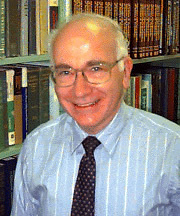 Anthony M. Trozzolo, Charles L. Huisking Professor Emeritus of Chemistry at the University of Notre Dame, has been named a 50-year life member of the American Association for the Advancement of Science (AAAS).

Trozzolos primary research interests have been in the creation and detection of reactive intermediates. He has completed pioneering studies of photochemically generated reactive intermediates in solution and solid states by a variety of spectroscopic techniques. His methodology often involves low-temperature or solid-state photochemistry.

Trozzolo has published more than 90 articles on his research and has been issued 31U.S.and foreign patents. He also has delivered more than 300 invited lectures at universities, international meetings, American Chemical Society symposia and industrial laboratories.

Trozzolo was elected a fellow of AAAS in 1963. He also is an elected fellow of the New York Academy of Sciences and the American Institute of Chemists. He also has been an active member of the American Chemical Society and has served as associate editor of the Journal of the American Chemical Society, editor of Chemical Reviews, and a member of the advisory board of Accounts of Chemical Research. He was chair of the first Gordon Research Conference on Photochemistry in 1964 and was elected to the board of trustees for the Gordon Research Conferences in 1988.

While at Notre Dame, Trozzolo developed and taught a new course for non-science majors titledSeeing the Light in Science,in which the many facets of light in everyday phenomena was the focus. He served as an assistant dean of theCollegeofSciencefrom 1993-98.

Trozzolo received his bachelors degree in chemistry from the Illinois Institute of Technology and his masters degree and doctorate from theUniversityofChicago. He was a member of the technical staff at the Bell Telephone Laboratories inMurray Hill,N.J., until he joined the Notre Dame faculty as Huisking professor in 1975.