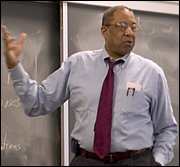 Sure its hard work being thepublic editorof the Chicago Tribune, but thats not why Don Wycliff is starting each week by rising at 4 a.m. at his home inEvanston,Ill.Hes allowing for the drive to Notre Dame to teach a three-hour weekly class in media criticism at 9.30 a.m. on Mondays this semester.

As public editor, Wycliff functions as the readersrepresentative for theMidwests leading newspaper.A 1969 graduate of Notre Dame and former chair of the advisory council for theCollegeofArtsand Letters, he started teaching in January as part of the Gallivan Program for Journalism, Ethics and Democracy.His seminar class meetsin the new Hammes Mowbray Hall that also houses the new campus post office and Notre Dame Security Police.

So, Don, hows it going so far?

He describes the experience asstressful.Certainly not a new experience for one whose job includes listening to the complaints ofChicago-area readers every workday.

Teaching, Ive found, is tough work if you aim to do it well,Wycliff noted.Every week I feel as if its opening night on Broadway.

Robert Schmuhl, chair of the Gallivan Program and professor of American studies, is pleased to have someone with Wycliffs professional credentials.

We find that students thrive with a mix of academic professors and the adjuncts who come directly from professional experiences,he said.Those connections also help in guiding the students toward professional internships, Schmuhl said.

Wycliff, who also has served on the Gallivanadvisory board, approached Schmuhl last year about possibly teaching.Ive reached the stage in life – 58 yearswhen a person feels he or she has something useful to pass along to younger people,Wycliff said.I guess Im finding out whether thats true.

He said the experience improves with time.Its getting a bit easier as I become better acquainted with my students, and they do more writing, and I am able to diagnose their needs and try to respond to them,he said.

Wycliff finds he can blend hisday jobwith the classroom responsibilities.I send along (to students), via e-mail, interesting articles that I encounter.I also use phone and e-mail encounters with readers as classroom material.

Asked for his early impressions of his students, Wycliff said,The students are without exception very bright.I wish they were more assertive, more questioning and argumentative,but he allows as how 9.30 a.m. on Monday might not be the best time to find those attributes.

The Gallivan Program for Journalism, Ethics and Democracy was established under Schmuhls direction in 1997.Endowed by the family of alumnus John W. Gallivan, after an initial grant from the John S. and James L. Knight Foundation, the program blends professional training with examination of social, political, economic and ethical factors that affect journalism.