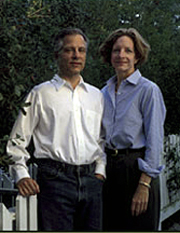 Andres Duany and Elizabeth Plater-Zyberk, the husband and wife team that leads the Miami architectural firm Duany Plater-Zyberk&Company (DPZ), have been named the recipients of the sixth annual Richard H. Driehaus Prize for Classical Architecture, administered by the University of Notre Dame School of Architecture. They will receive $200,000 and a model of the Choregic Monument of Lysikrates at a ceremony March 29 in Chicago.

Two of the most influential and controversial architects and town planners in the country, Duany and Plater-Zyberk have been at the forefront of the effort to revive the principles of traditional neighborhood design. Plater-Zyberk describes their work as using successful and sustainable design ideals to address the challenges of modern life. They view traditional town planning as a panacea for social ills ranging from traffic congestion and other environmental threats to the disenfranchisement of the poor and the elderly.

In addition to their architectural and academic work, Duany and Plater-Zyberk are best known for designing citiesstreet grids, town centers, parksand for writing architectural and building codes that help revitalize communities. DPZ has completed designs for nearly 300 new towns, regional plans and revitalization projects, including neighborhoods in Naples, Fla.; Baton Rouge, La.; and Providence, R.I. Plater-Zyberk, the dean of the University of Miami School of Architecture, also leads Miami 21, a project to overhaul city zoning intended to discourage exposed parking garages, create wider sidewalks and build homes where people can live above their businesses.

Duany and Plater-Zyberk have received numerous design awards, including the Brandeis Award for Architecture, the Thomas Jefferson Memorial Medal of Architecture from the University of Virginia, the Vincent J. Scully Prize for exemplary practice and scholarship in architecture and urban design from the National Building Museum, and the Seaside Prize for contributions to community planning and design from The Seaside Institute. Plater-Zyberk received an honorary doctorate in architecture from the Notre Dame in 1998. Duany and Plater-Zyberk met as undergraduates at Princeton and both received masters degrees from the Yale School of Architecture.

Roger G. Kennedy, the National Park Service director under President Clinton for four years, will receive the $50,000 Henry Hope Reed Award in association with the Driehaus Prize. The author of “Greek Revival America” and “Wildfire and Americans: How to Save Lives, Property and Your Tax Dollars,” as well as an historian, teacher and public servant, Kennedy is respected for his tireless advocacy for the importance of sound environmental practices and sustainability.

Richard H. Driehaus, the founder and chairman of Driehaus Capital Management in Chicago, endowed both awards through the Notre Dame School of Architecture because of its reputation as a national leader in incorporating the principles of traditional and classical architecture into the task of modern urban development.