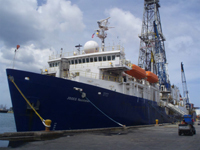 Clive Neal, professor of civil engineering and geological sciences at the University of Notre Dame, is sailing the deep blue sea from Feb. 4 through March 5. His trip is not a pleasure cruise, but a unique journey that is part of a significant moment for the world of ocean research.

Neal is sailing aboard the JOIDES Resolution, a riserless drilling vessel operated by the Integrated Ocean Drilling Program for scientific exploration of the ocean floor. The Resolution left a Singapore shipyard in January for initial sea trials after being completely refurbished and modernized.

In his role as a member of the redesign task force and now chair of the readiness assessment team, Neal leads the group of scientists responsible for determining if the Resolution is ready to resume international operations.

The team is putting the ship’s drilling, coring, logging and science systems through vigorous testing during additional sea trials on the Ontong Java Peninsula, a huge undersea plateau located in the Pacific Ocean, lying north of the Solomon Islands.

Once the Resolution is certified, it will travel to Honolulu for its first expedition: the Pacific Equatorial Age Transect. During this first project, in which they will target eight different sites within a 3-degree latitudinal window, the researchers hope toobtain a sedimentary archive for time periods immediately after the Paleocene/Eocene boundary event through the Miocene period (from 34 million to 5 million years ago).

The JOIDES Resolution began operations in 1978 as an oil exploration vessel. After being converted for scientific research in 1985, it became part of the Ocean Drilling Program (now the Integrated Ocean Drilling Program), where it continued its efforts through 2005. In addition to a crew of 65, a typical ship’s compliment consists of up to 50 scientists and technicians.

The ship was named for the HMS Resolution, which sailed under the command of Capt. James Cook more than 200 years ago, exploring the Pacific Ocean and the Antarctic region.