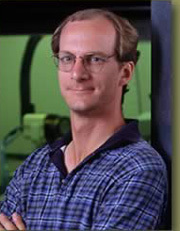 The University of Notre Dame will be home to one of 46 new multi-million-dollar Energy Frontier Research Centers (EFRCs) announced yesterday (April 27) by the White House in conjunction with a speech delivered by President Barack Obama at the annual meeting of the National Academy of Sciences.

The EFRCs, which will pursue advanced scientific research on energy, are being established by the U.S. Department of Energy (DOE) Office of Science at universities, national laboratories, nonprofit organizations and private firms across the nation.

The University of Notre Dame’s EFRC is one of 16 to be funded by President Obama’s American Recovery and Reinvestment Act.

Peter C. Burns, chair of the University’s Department of Civil Engineering and Geological Sciences, will be director of the new center. Burns said that this is a unique and important opportunity for scholars at Notre Dame and partner institutions to impact future energy challenges facing the nation and the world.

Notre Dame’s EFRC is titled “Materials Science of Actinides.” The focus of this center, which includes participants from several other universities and national laboratories, is the elements that are the basis of nuclear energy (uranium, plutonium and other actinides). Research in the center will seek to understand and control materials that contain actinides at the nanoscale, which is about one-millionth of the size of the tip of a ball-point pen. This research is intended to lay the scientific foundation for advanced nuclear energy systems that may provide much more energy while creating less nuclear waste.

“As global energy demand grows over this century, there is an urgent need to reduce our dependence on fossil fuels and imported oil and curtail greenhouse gas emissions,” said U.S. Secretary of Energy Steven Chu. “Meeting this challenge will require significant scientific advances. These centers will mobilize the enormous talents and skills of our nation’s scientific workforce in pursuit of the breakthroughs that are essential to make alternative and renewable energy truly viable as large-scale replacements for fossil fuels.”

The DOE plans to fund the 46 EFRCs at $2.5 million per year each for a planned initial five-year period. The locations were selected from a pool of some 260 applications received in response to a solicitation issued by the DOE Office of Science in 2008. Selection was based on a rigorous merit review process utilizing outside panels composed of scientific experts.

EFRC researchers will take advantage of new capabilities in nanotechnology, high-intensity light sources, neutron scattering sources, supercomputing and other advanced instrumentation, much of it developed with DOE Office of Science support over the past decade, in an effort to lay the scientific groundwork for fundamental advances in solar energy, biofuels, transportation, energy efficiency, electricity storage and transmission, clean coal and carbon capture and sequestration, and nuclear energy.

Of the 46 EFRCs selected, 31 are led by universities, 12 by DOE National Laboratories, two by nonprofit organizations, and one by a corporate research laboratory. The criterion for providing an EFRC with Recovery Act funding was job creation. The EFRCs chosen for funding under the Recovery Act provide the most employment for postdoctoral associates, graduate students, undergraduates and technical staff, in keeping with the Recovery Act’s objective to preserve and create jobs and promote economic recovery.