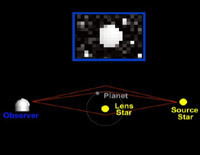 David Bennett, a University of Notre Dame astrophysicist, is a member of an international team of astronomers that has discovered the most distant giant planet to orbit an ordinary star in the Milky Way. This is the first unequivocal planet discovery to be made by a technique known as gravitational microlensing.p. Microlensing first was proposed as a method for detecting extra-solar planets by astrophysicist Bohdan Paczynski of Princeton University in 1991. A number of collaborative research efforts, including Microlensing Observations in Physics (MOA) and the Optical Gravitational Lensing Experiment (OGLE), have since reported microlensing events due to stars. MOA and OGLE researchers, including MOA team member Bennett, will report the first definite detection of a planet through gravitational microlensing in the May 10 issue of The Astrophysical Journal Letters.p. During a gravitational microlensing event, the almost perfect alignment between a background source star, a lens star, and an observatory allows researchers to discover a planet that orbits the lens star. The technique enables detection of a planet through the effect of the planet’s gravitational field on the light seen from the more distant background star.p. When two stars are nearly perfectly aligned as seen from Earth, the gravitational field of the foreground star acts as a lens to magnify the background star. The magnified image is very small and can only be resolved with a telescope that produces images 1,000 times sharper than the Hubble Space Telescope, hence the term “microlensing.”p. Most of the one thousand microlensing events observed thus far have followed a brightening pattern or “light curve” characteristic of a lens composed of a single star. However, some have followed a very different light curve caused by a lens composed of a double star.p. The planetary microlensing event observed by the OGLE and MOA collaborations resembled the single lens light curve for most of its four-month duration. However, for a period of about a week, the gravitational field of the planet causes the light curve to resemble that of a double star lens.p. The precise shape of the light curve in the event observed by OGLE and MOA reveals that the lighter mass of the double lens has only 0.4 percent of the mass of the heavier component, which implies that the lighter component must be a planet. Analysis of the light curve revealed that it was most likely a red dwarf star and a planet of about 1.5 times the mass of Jupiter at a separation of about 3 AU. (An Astronomical Unit, or AU, is the mean distance between the Earth and Sun). It was located about 17,000 light years away toward the central part of the Galactic disk, in the constellation Sagittarius.p. The MOA and OGLE groups expect that microlensing observations over the next few years will lead to discoveries of Neptune-mass planets in Jupiter-like orbits around distant stars. The improved sensitivity required for such discoveries is being made possible by the new large field-of-view OGLE-III camera, the MOA-II 1.8m telescope now being built, and improved cooperation between the different groups that observe microlensing events.p. Earth-like planets also are detectable by microlensing under favorable conditions. But to do a systematic study of their abundance requires a space-based telescope, such as the proposed Microlensing Planet Finder (MPF).p. “MPF would have the sensitivity to detect planets like those in our own solar system with the exception of Mercury and Pluto,” said Bennett, who is leader of the MPF team. "MPF could complete the census of Earth-like planets begun by Kepler, a NASA mission in development, which can find Earth-like planets at star-planet separations as large as the Earth-Sun distance.p. More information on the planet discovery can be foundp. http://www.nd.edu/~bennett/moa53-ogle235/ .