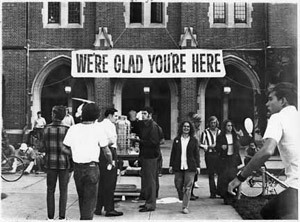 The 40th anniversary of coeducation at the University of Notre Dame.

The 40th anniversary of coeducation at the University of Notre Dame will be celebrated in a panel discussion, “Paving the Way: Reflections on the Early Years of Coeducation at Notre Dame,” at 7:30 p.m. Nov. 8 (Thursday) in the auditorium of the Eck Visitors Center.

The discussion, sponsored by Notre Dame’s Cushwa Center for the Study of American Catholicism with the Department of American Studies, the Gender Studies Program and Badin Hall, will include five people who experienced and shaped Notre Dame’s transition from an exclusively male to coeducational institution.

“The 40th anniversary of coeducation at Notre Dame is a significant milestone not only in the life of the University but also in the history of American women, U.S. Catholicism and higher education,” said Kathleen Sprows Cummings, director of the Cushwa Center. “With that in mind, we invited three undergraduate alumni, a law school alumna who became Badin Hall’s first female rector, and a history professor who served as vice president for student affairs during that era to share their memories. A historian of American women who has studied the transition to coeducation at Notre Dame and other universities will join the panel to offer historical perspective.”