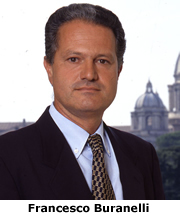 Francesco Buranelli, director of the Vatican Museums, will present the 2007 Terrence R. Keeley Visiting Vatican Lecture at 7:30 p.m. April 17 (Tuesday) in the Annenberg Auditorium of the Snite Museum of Art at the University of Notre Dame.

TitledThe Vatican Museums: The Holy Sees Portal to the World,the lecture is free and open to the public.

Buranellis visit to campus, from April 15 to 19, is cosponsored by Notre Dames Nanovic Institute for European Studies and the Snite Museum of Art.

Buranelli was appointed general director of the Vatican Museums by Pope John Paul II in 2002. The museums collections, including Michelangelos frescoes in the Sistine Chapel, are visited by more than 3 million people annually. A new Web site, engineered under Buranelli, makes virtual access to the majority of the institution available to people around the world.

The museum director and his staff are responsible for the restoration and promotion of all art of the Holy See, including architecture as well as moveable works in the galleries. Buranelli also represents theVaticanin international preservation and restoration conferences and organizes traveling exhibitions.

A native ofRome, Buranelli has worked at the Vatican Museums for 25 years. He earned a degree in etruscology and Italic antiquities and a dottore di ricerca (doctoral degree) in archeology from Rome University La Sapienza.