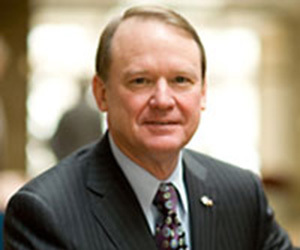 The University of Notre Dame Graduate School will hold its annual Commencement Ceremony 10 a.m. May 20 (Saturday) in the Compton Family Ice Arena.

At the ceremony, the University will recognize and celebrate the recipients of 240 doctoral degrees and 478 master’s degrees.

Dick Notebaert, the chairman emeritus of the Notre Dame Board of Trustees, and the retired chairman and chief executive officer of Qwest Communications Inc., will deliver this year’s commencement address. Notebaert and his wife, Peggy, are the benefactors of the Notebaert Premier Fellowships, the largest single gift ever bestowed upon the University for graduate education, and have deeply embraced the Graduate School’s holistic model of post-baccalaureate training.

The ceremony will include the presentation of the inaugural Notebaert Award, which will be given to Matthew Capdevielle for his leadership on behalf of Notre Dame graduate students as the director of the University Writing Center. Capdevielle’s dedication to promoting graduate student professional development and collaborating across campus to develop innovative training and mentoring opportunities is particularly worthy of recognition.

The recipients of the following Graduate School awards will also be recognized during the ceremony:

The top graduating doctoral students in engineering, the humanities, social sciences and science will be honored with the Eli J. and Helen Shaheen Graduate School Awards.