Researchers at the University of Notre Dame and Pennsylvania State University have announced breakthroughs in the development of tunneling field-effect transistors (TFETs), a semiconductor technology that takes advantage of the quirky behavior of electrons at the quantum level.

Transistors are the building blocks of the electronic devices that power the digital world, and much of the growth in computing power over the past 40 years has been made possible by increases in the number of transistors that can be packed onto silicon chips.

But that growth, if left to current technology, may soon be coming to an end.

Many in the semiconductor field think the industry is fast approaching the physical limits of transistor miniaturization. The major problem in modern transistors is power leakage leading to the generation of excessive heat from billions of transistors in close proximity. 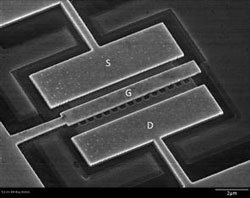 The recent advances at Notre Dame and Penn State — who are partners in the Midwest Institute for Nanoelectronics Discovery (MIND) — show that TFETs are on track to solve these problems by delivering comparable performance to today’s transistors, but with much greater energy efficiency.

They do this by taking advantage of the ability of electrons to “tunnel” through solids, an effect that would seem like magic at the human scale but is normal behavior at the quantum level.

“A transistor today acts much like a dam with a moveable gate” says Alan Seabaugh, professor of electrical engineering at Notre Dame and the Frank M. Freimann Director of MIND. “The rate at which water flows, the current, depends on the height of the gate.

“With tunnel transistors, we have a new kind of gate, a gate that the current can flow through instead of over. We adjust the thickness of the gate electrically to turn the current on and off.

“Electron tunneling devices have a long history of commercialization,” adds Seabaugh. “You very likely have held more than a billion of these devices in a USB flash drive. The principle of quantum mechanical tunneling is already used for data storage devices.” 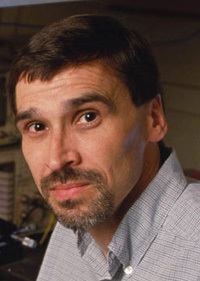 While TFETs don’t yet have the energy efficiency of current transistors, papers released in December 2011 by Penn State and March 2012 by Notre Dame demonstrate record improvements in tunnel transistor drive current, and more advances are expected in the coming year.

“Our developments are based on finding the right combination of semiconductor materials with which to build these devices,” says Suman Datta, professor of electrical engineering at Penn State.

“If we’re successful, the impact will be significant in terms of low-power integrated circuits. These, in turn, raise the possibility of self-powered circuits which, in conjunction with energy-harvesting devices, could enable active health monitoring, ambient intelligence and implantable medical devices.”

Another benefit of tunneling transistors is that using them to replace existing technology wouldn’t require a wholesale change in the semiconductor industry. Much of the existing circuit design and manufacturing infrastructure would remain the same.

“Strong university research on novel devices such as TFETs is critical for continuing the rapid pace of technology development,” said Jeff Welser, director of the Nanoelectronics Research Initiative. “Much of the industry recognizes that it will take collaborations with both academia and government agencies to find and develop these new concepts.”

MIND is one of four centers funded by the Semiconductor Research Corporation’s Nanoelectronics Research Initiative (NRI). The goal of NRI and its university-based centers is to demonstrate novel computing devices capable of replacing the complementary metal oxide semiconductor transistor as a logic switch. Established in 2008, MIND is led by Notre Dame and includes Penn State, Purdue and University of Texas-Dallas.