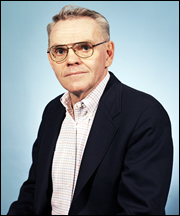 Neil Delaney, professor of philosophy, director of the Arts and Letters and Science Honors Program, and coordinator of an academic component that complemented the spring presentation of the playArcadia,has been selected by his peers as recipient of the 2005 Faculty Award.

Delaney was honored Tuesday during the annual Presidents Dinner, where he was lauded as acrack philosopherandthe model of a teacher-scholar.A member of the faculty since 1967 and an award-winning teacher, Delaney also was cited forhis consummate administrative skills,evidenced by growth experienced during his 10 years as philosophy department chair.

Brown, associate professor of chemistry and biochemistry, also has served since 2003 as chair of the Faculty Senate, quickly demonstrating both leadership skill and diplomacy.His manifest concern for making Notre Dame a better university than it is today motivates him to volunteer for the hard committee work that is the unavoidable prequel to that goal,his award citation notes.

Crowell, associate professor of psychology and director of the computer applications program, is lauded forvisionary leadershipin the areas of curricula development and mentoring students. A faculty member since 1974, Crowell played a crucial role in the Universitys procurement of a $1 million grant from the Lilly Endowment, Inc. that helped establish the Notre Dame Indiana Careers Initiative.

As director of theGigotCenterfor Entrepreneurial Studies since 1998, Davis has developed the program into one of the top undergraduate programs in the nation.Daviscommitment to social service has led him to initiate Gigot partnership programs that provide training for startup businesses in low-income areas and the not-for-profit sector. He has also established a business internship program inSouth Africa, now in its eighth year.

A 40-year veteran of the faculty, Hahn parlayed his passion for mathematics into a passion for teaching, assuming the directorship of theKanebCenterfor Teaching and Learning in 2000. Hahn has famously worked to ensure that all students succeed in mathematics, particularly those who faced University mathematics requirements, such as students in theCollegeofArtsand Letters.

Haynes, executive director of theMarieP.DeBartoloCenterfor the Performing Arts, oversaw the construction of the new center and, over the past academic year, dozens of performances in its five venues.In less than one year, the centers programs have taken the arts and culture at Notre Dame into a magnificent new realm.Haynes is lauded both for encouraging student participation and attracting internationally renowned artists.

Maurice, professor of civil engineering and geological sciences, has directed the Center for Environmental Science and Technology for the past three years, a focal point of multidisciplinary activity that is essential to many of the Universitys environmental research endeavors. She is lauded for her vibrant and innovative environmental research on freshwater wetlands and mineral-water interactions. Her citation also lauds herstrong emphasis on student research experiences.

Tomasula is honored asan exemplary teacher and an artist of national stature whodemonstrates the significance of the visual arts as part of a comprehensive education.Recently votedBest Established ArtistbyChicagoart critics, her works are routinely exhibited in national art centers inNew York,Los AngelesandChicago.Her example reminds us that artists, in their quest for beauty, nourish and sustain our souls and, in their quest for truth, provoke and challenge us to look carefully at the world around us.

Named awards honoring faculty and staff for individual and unique contributions to the University were also presented at Tuesdays dinner. The awards, and their recipients, were:

The Rev. James A. Burns, C.S.C., Graduate School Award to Scott P. Mainwaring, Eugene P. and Helen Conley Professor of Political Science and director of the Helen Kellogg Institute for International Studies. Mainwarings research explores the role of the Catholic Church in Latin American, on popular movements and democratization and, most recently, on political institutions and democracy. The Burns Award recognizes distinction in teaching and exemplary contributions to graduate education. Its recipient is nominated by faculty and graduate students.

The Grenville Clark Award, to Barbara Fick, associate professor of law, in recognition of her professional focus on understanding and improving the position of the worker in society. She has been a dedicated volunteer to the YWCA of St. Joseph County for 20 years, serving for six years as its president. The Clark Award honors members of the community whose volunteer activities and public service advance the cause of peace and human rights.

The Rev. JohnPopFarley, C.S.C., Award to Sister Patricia J. Thomas, O.P., rector of Walsh Hall, who is known forher kindness, compassion and sense of humor.Sister Thomas has served on a number of University committees and has been actively involved in diversity education efforts. The Farley Award is presented by Student Affairs to honor a person outside the classroom whose contributions enrich the religious, disciplinary, social, recreational and physical welfare of students.

The Thomas P. Madden Award for outstanding teaching of freshmen to Alex A. Himonas, associate chair and professor of mathematics. Himonasuncommon concern for student learningled him to design a large multisection service course for Notre Dame business students and to write a book on the subject. His outreach to first-year students has included expanding the number and variety of 100-level offerings, and he has transformed calculus tutorials into interactive collaborative learning experiences. The recipient is selected by former Madden winners.

The Reinhold Niebuhr Award to Rev. Gustavo Gutiérrez, John Cardinal OHara Professor of Theology. A member of the Notre Dame faculty since 2001, Gutiérrez is considered one of the worlds most effective advocates for the dignity of human life and is considered a founder of the liberation theology movement. The award citation notes that his many international awards and accolades reminds us thatthis gentle man exudes a kindness and good nature that are exceptional and inspirational.The award recognizes a faculty member, student or administrator whose life and teachings promote or exemplify the theological and philosophical concerns of Niebuhr, the late Protestant theologian and author.

The Research Achievement Award to Frank H. Collins, George and Winifred Clark Professor of Biological Sciences, for his superb record of contributions to the field of biological sciences and his passionate work to eliminate the threat of malaria and other vector-borne infectious diseases. His most recent research has led to the development of DNA-based tools for rapid species identification. They have been introduced into laboratories in most of the malaria-endemic countries ofAfrica.

The Rev. Paul J. Foik, C.S.C., Award to librarian Eric Lease Morgan, whose work on updating the University Libraries Web page has been lauded by library professionals as creating an academic library Web site for the 21 st century. The award citation honors Morganparticularly for his tireless efforts toelicit input from library users while the Web page was being created and modified.The Foik Award is given annually to a library faculty member who has contributed significantly to library service, the Notre Dame community, or the library profession.

The Rev. William A. Toohey, C.S.C., Award for Preaching was awarded to Rev. Mark L. Poorman, C.S.C., whose Sunday homilies and daily reflections are always profound and appealing reflections on the Gospel that are applied directly to the lives of the students.Poorman, vice president for student affairs, has friendships with undergraduate and graduate students that allow him to appreciate studentsformative years andlead them to seek his counsel and to treasure his friendshiphis citation reads.