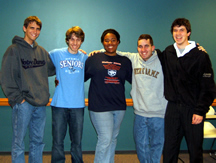 Some 75 teams consisting of two students each will be competing from 20 schools, including theUniversityofIllinois, Miami University of Ohio,WheatonCollege,UniversityofTexasatSan Antonio, Case Western Reserve, andMarquette, Loyola andJohnCarrollUniversities.

All debates, to be held in some 50 DeBartolo classrooms, are free and open to the public.

Parliamentary debate topics, which change with each round, will include affirmative action at universities, the U.N. andIran, immigration policy, military recruiting on campuses,U.S.economic policy toward African nations, and reality TV.

The policy debate resolution, which remains the same throughout the academic year, is titledResolved: The United States federal government should substantially increase diplomatic and economic pressure on the Peoples Republic of China in one or more of the following areas: trade, human rights, weapons nonproliferation, Taiwan.

The Notre Dame Debate Team, which is composed of students from Notre Dame, Saint Marys College andHolyCrossCollege, this year formed its first policy debate team in more than a decade, thanks to the support of alumnus William T. Carey and his wife, Helen.

Debate Team members travel to several national tournaments each year and have competed successfully against other prominent teams fromCalifornia,Kentucky,Minnesota,Nebraska,TexasandIllinois.The team belongs to the National Debate Tournament, the most expansive competitive debate organization in the country.