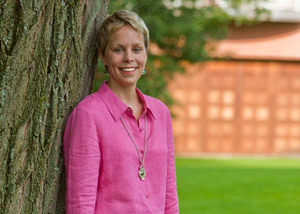 The University of Notre Dame’s DeBartolo Performing Arts Center will host the world premiere of “Resounding Earth” by renowned composer Augusta Read Thomas at 2 p.m. Sept. 30 (Sunday) at Leighton Concert Hall, to be performed by the Chicago-based ensemble Third Coast Percussion. Tickets for the concert are $20, $18 for seniors and $15 for students.

Commissioned by the University of Notre Dame’s DeBartolo Performing Arts Center and the Virginia Commonwealth University School of the Arts, with additional funding from Chamber Music America Classical Commissioning Program and Endowment Fund and The Andrew W. Mellon Foundation, “Resounding Earth” is a 28-minute work for a percussion quartet featuring more than 125 bells from a wide variety of cultures and historical periods. Thomas and the Third Coast Percussion will be in residence at Notre Dame for the week prior to the premiere concert, providing youth education outreach in local schools.

Regarding the creation of “Resounding Earth,” Thomas notes, “Bells have served as an important element in much of my music for over 25 years. Bells can be used to celebrate grand occasions, hold sacrificial rites, keep a record of events, give the correct time, celebrate births and weddings, mark funerals, caution a community, enhance any number of religious ceremonies, and are even hung around the necks of animals.” Conceived as a statement that celebrates interdependence and commonality across all cultures, “Resounding Earth” explores the beauty and diversity of expression inherent to bells.

Composed in collaboration with Third Coast Percussion, “Resounding Earth” gave Thomas the opportunity to work with the four young musicians whom she met while they were studying at Northwestern University, where Thomas was Wyatt Professor of Music from 2001-06. She describes the four gentlemen — Owen Clayton Condon, Robert Dillon, Peter Martin and David Skidmore — as “world-class virtuosi, ardent collaborators, visionary artists and spectacular teammates. ‘Resounding Earth’ has involved countless hours of refining nuances, colors, tunings, mallet choices, bell placements and honing any number of other shadings and gradations of the sound.” 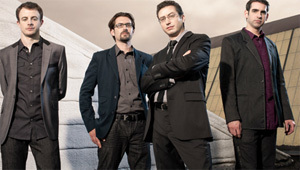 “Resounding Earth” is the first of four major premieres by Thomas for the 2012-13 season, including “Earth Echoes” with the Orpheus Chamber Orchestra, featuring mezzo-soprano Sasha Cooke and baritone Nathan Gunn, on Oct. 11 at Carnegie Hall in New York City; “Harvest Drum” on Dec. 20 with the National Centre for the Performing Arts Symphony Orchestra, National Performing Arts Centre, Beijing; and Cello Concerto No. 3, with the world-renowned Boston Symphony Orchestra, conducted by Christoph Eschenbach, and featuring Lynn Harrell, cello, on March 14-16, 2013.

Hailed by the Chicago Reader as “one of the finest new-music ensembles in the country,” Third Coast Percussion presents concerts around the country for all audiences, from the percussion novice to the contemporary music aficionado.

The DeBartolo Performing Arts Center facilitates learning reflective of Notre Dame’s distinctive liberal arts tradition through the informed exploration of universal truths and beauty. The center serves to encourage and celebrate the human spirit through the performing and cinematic arts that connect, stimulate and enrich its communities.